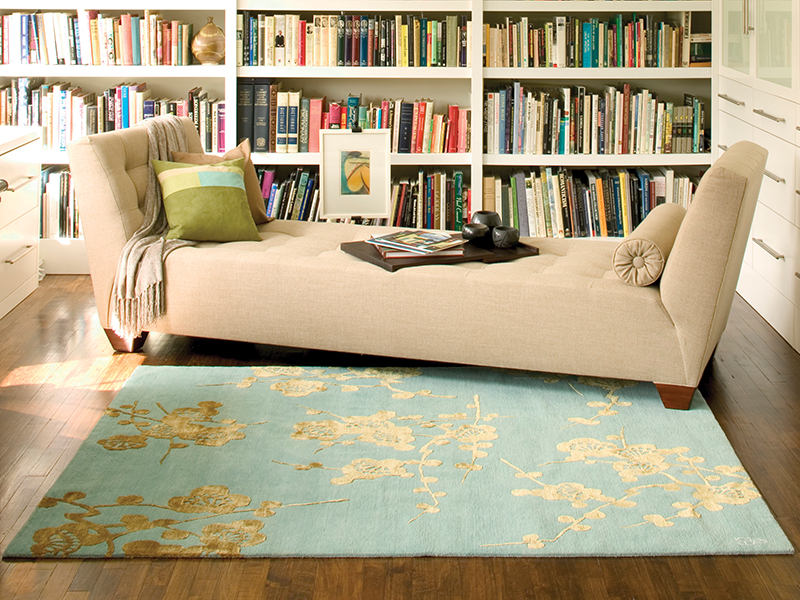 Details
By: Emma Gardner with Editorial and commentary by Michael Christie

When award-winning designer Emma Gardner first introduced her ‘Spray’ design during ICFF in 2003 it became an instant classic. As the design now reaches its teenage years, Rug Insider looks at its history and evolution.

Emma Gardner was born in Kyoto, Japan growing up in Brooklyn, New York and Westport, Connecticut. She studied textile design at F.I.T., painting and drawing at Cooper Union, has a B.A. from Wesleyan University and has done graduate work in English literature at Columbia. Prior to her career as a rug designer and artist she was an editor and illustrator which allowed her to hone the celebrated sense of color and composition which informs her current artistic and rug endeavors. Spray, perhaps her most iconic design and one that has maintained a timeless appeal for almost fifteen years, was adapted from a book of old kimono patterns and remains an epitome of style.

“When we started the business in 2002, minimalism was still fairly dominant in interior design— very clean lines, a lot of geometry, the 90’s response to the excesses of the 80s still really holding sway. I thought it would be interesting to bring some softness and unapologetic beauty to that kind of austerity. It could compliment and provide an interesting counterpoint to that reserve. I can’t claim to be the only one to have started moving in that direction but it was very early on in that shift, the way designers are often at the vanguard of what eventually becomes an accepted look.” says Gardner of the period before continuing. “Since my earliest childhood I loved Japanese art, design and textiles. While I was born in Kyoto, we left before I was two, before I could remember being there, but growing up the house was always filled with Japaneserie—books, boxes, kimono, cards, dolls and so on. Japan somehow remained a big part of our lives and I think my aesthetic predilections were established very early on.”

It was in this spirit Gardner introduced three rugs based on kimono patterns during the firm’s debut showing at ICFF in 2003. “All of the rugs were in contrasting, highly saturated colors.” adds Gardner. Spray was one of these first rugs and in fact was the only one that used the simple cherry blossom motif as was. Spray was also an immediate success and continues to be incredibly popular. Emma Gardner Design — which distributes through rug and furniture showrooms as well as through direct business with designers and architects — has done innumerable custom colorations of the design as well as of the shape, size, and scale of the motif.

As one familiar with customization of rugs might well expect, Gardner personally oversees the reworking of the design to match the requirements of the project. “I use the general blossom motif and place it around the rug for balance depending on the project while trying to retain the original pleasing spacing between blossoms, one that allows a good amount of ground and for the blossoms to stand out in their beautiful simplicity. Japanese patterns and design is just so damn good [to begin with] it really never goes out of style.”

The original versions of Spray (such as the iconic Seablue Gold, the rich Chocolate Blue, or the the sultry Eggplant Pepper) utilized wool for the field and silk for the motif and were also the first design the firm rendered with the silk raised and carved in order to emphasize the motif as well as the “shimmery feeling of luxury that the silk provides.” Throughout the years and various custom iterations of the design, the basic texture has remained the same and while calling it “dated” would be overly harsh and inaccurate, it is ‘dateable’, that is to say, indicative of the era in which it was first created.

Given the design’s continued success but also recognizing that ‘the timeless simplicity of the pattern lends itself so well to reinterpretation’ Gardner and her husband and business parter Patrick McDarrah sought to reinvent the design in order to bring it into the now. “You always have to be finding and following your audience.” says McDarrah before Gardner interjects as if to reiterate changes are nothing new “We’ve
already adapted the design so much over the years.” As the audience, that is to say the customer is always changing—now faster than ever—the firm has smartly followed suit. “The most fun thing for me is presenting Spray in some gorgeous new colors.” says Gardner.

It wasn’t just new color the firm introduced during the Fall 2017 Rug Show New York, but also texture and it is the latter which takes the “timeless simplicity of the pattern” from classic to au courant. The timely Spray TK Smoky Gold and the “very well received” according to Gardner, Spray TK Lead, both manufactured by Tamarian for Emma Gardner Design, incorporate Tamarian’s Twisted Knot construction to give added nuance and depth to this very successful reinvention of the design.

“[Working with] Tamarian is a treat for a few reasons.” begins Gardner “Tamarian uses a lot of techniques that we at Emma Gardner Design typically don’t, some that they’ve even patented.

Different from our original fully saturated areas of color, the weaving here produces a look with a lot more variety and texture in the base color. I think that is perfectly in keeping with more current design trends that favor a natural, organic look. The versions debuted during The Rug Show were flat pile, and while we will always offer the option of raised for custom, we will probably stick with the silk and wool flush, as many designers say their clients prefer or are less intimidated by flat pile so it’s nice for them to see the option in an actual rug.” 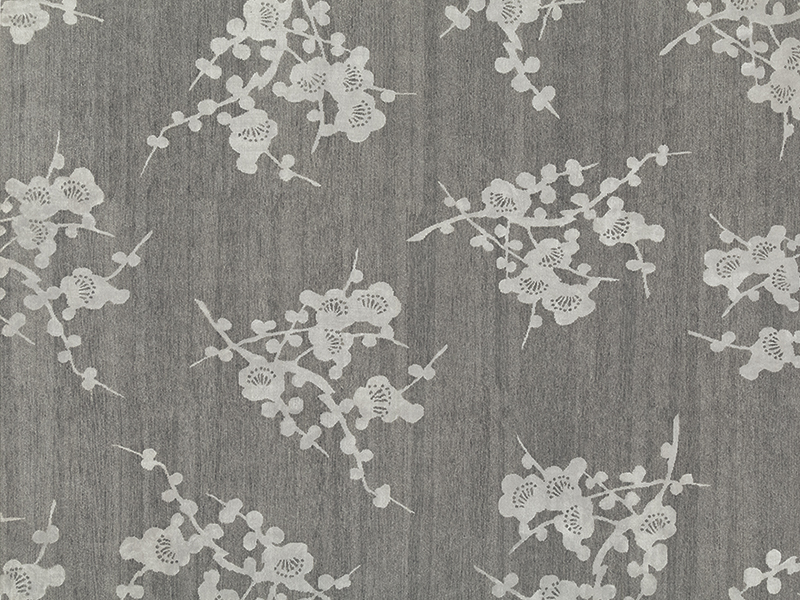 Gardner also speaks of influences beyond those originating in the past making reference to technology and the internet’s influence. “Since we first introduced the rug, the internet generally but especially Pinterest and Instagram have become so dominant for those of us in aesthetic fields. It can of course be overwhelming but it’s also incredibly stimulating and inspiring. I am looking at beautiful colors every day, creating and sharing my own palettes in response as part of the conversation and it’s wonderful to be able to introduce some of the ones I’m really jazzed about.”

Gardner might be jazzed about colorations also describable as jazzy, but in the end it is the audience, the customer with whom the palette has to resonate. The flow of information however is no longer one way with carpet designers listening to feedback and presenting solutions, rather it is truly a conversation as Gardner says, with customers (of all levels and types) being actively involved in the creation of new palettes. So while it is that Gardner has updated Spray for 2017, we at Rug Insider, working in partnership with Emma Gardner Design and Tamarian in collaboration with Alternative Technology, invite you to “join the conversation” via an exclusive look at what custom colorization can look like through our interactive feature found here: ruginsider.com/egdspray

Perhaps the colorations created therein will find their way into a future iteration of the design, one that speaks to the next generation of design consumers, one that continues the evolution of “the timeless simplicity” of this striking and classic design.