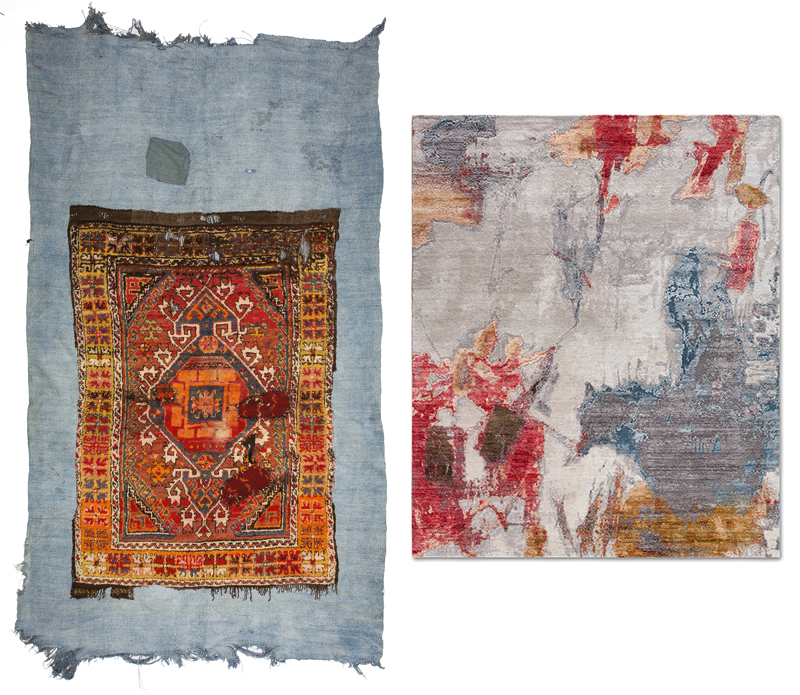 The notion of collecting—of mixing and matching—is nothing new in the world of interiors, nor within certain genres of carpets. In fact for many, a proper interior is soulless without the the air of unpredictability so often seen in great collections. But to transcend antique and modern? Rug Insider invited a few esteemed colleagues to show us how.

Lede image: “I matched our latest rug ‘Hard Boiled Splash’ with the work of Bereket but think of the pairing as more than just colors coordinating. Rug Star and Bereket both love what we do and we both want people to be touched and as such when you see or live with our carpets, there is an urge to communicate hidden meaning in the work… The rest of the answer could be an explanation of palette and proportions, but this I leave this to people with a heart and two eyes.” – Jürgen Dahlmanns, Rug Star

For those who collect, be it old and antique rugs and carpets or otherwise, there seems to already be an innate understanding and appreciation for the mixing of styles. Each assemblage is a representation in whole of the love the owner has for each individual piece. My favorite rooms always look as if the owner hasraveled to every corner of the globe and attained beautiful textiles along the way with an eye for a certain palette they keep with accuracy in their memory,” said Tamarian’s Ned Baker when asked to pair one of his firm’s carpets with reworked vintage rugs from the Selam Collection by Bereket Unlimited of Istanbul, Turkey.

It is this same mindset which dominates aesthetic genres from Southern Living to French Country to Tudor Revival and beyond. It’s evocative of interiors from the era of the Grand Tour and in truth it is representative of the way most people live within their own spaces, slowly building a collection of beloved items over time. For durable and enduring wares such as handmade carpets it is then all but imperative that rugs—whether new or antique, modern or traditional—acquired at different points in time be able to somehow relate to one another and within decorative spaces as a whole.

“An existing element in an interior, and specifically a rug, can really be a gift to the design process,” Baker adds, “because it’s an immediate springboard. The lack of any concrete vision or component often leaves the process sputtering. But a good tip on color or style [such as an existing antique rug to be paired with something modern and vice-versa] can spark immediate inspiration.” 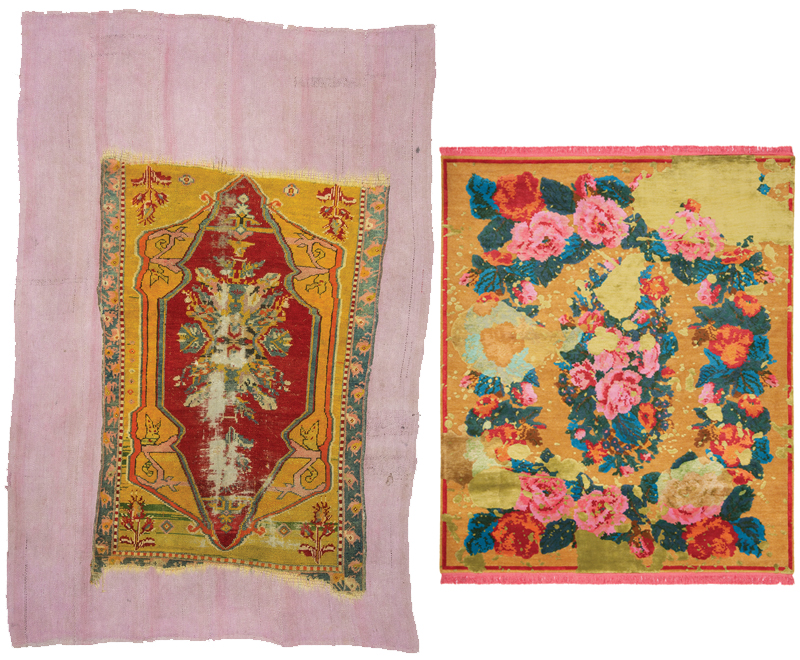 Above: “The antique piece still holds its vibrant colors of reds, yellows, and pinks while the dancing floral motifs bring thoughts of cold evenings in St. Petersburg. As such, we selected our Nepali hand-knotted silk and wool carpet ‘Janka Splashed’ from our From Russia With Love Collection as its companion. This quintessential pairing of mutually-evocative styles and color relates the opulence and contemporary twist of the Jan Kath design to the museum-like treatment and provincial styling of the piece from Bereket.” – Kyle Clarkson, Jan Kath

Once inspired, however, the overall design can proceed in multiple, perhaps divergent directions. For example, Kyle Clarkson from Jan Kath chose to pursue a pairing which reinforces both color and motifs erring toward the more traditional or conservative, albeit with a twist. Baker pushes to the other extreme to “illustrate my previous point of using a subtle draw of color to tie the pieces together.” Jürgen Dahlmanns of Rug Star rather favors an approach somewhere betwixt the two so long as the result ”adds some unpredictable soul in the design world.”

Dahlmanns continues, “That need of mine [unpredictable soul] is the reason I am so touched by the work of Bereket, one of the strongest and most radical thinkers and innovators we have in the rug industry. In fact, they are always my role model for mindset and kindness.” 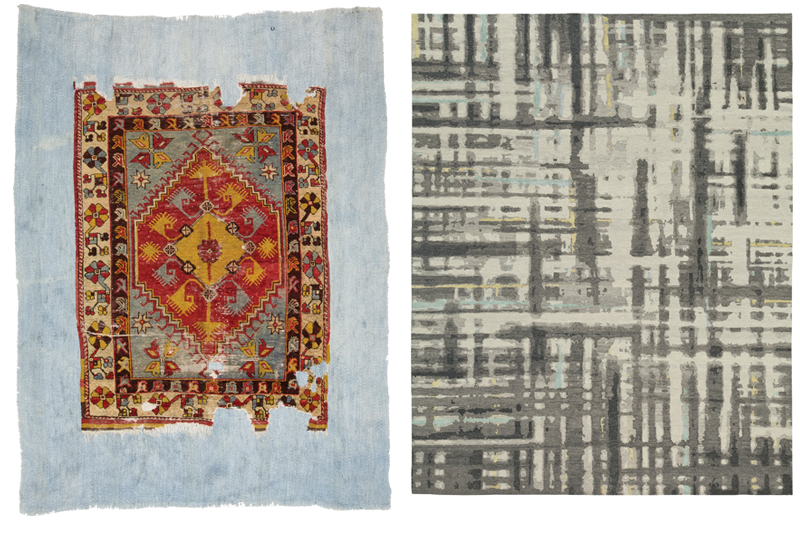 Above: “I’m inclined to start at the furthest point from that safe harbor of ‘matchy-matchy’ and set out to find that magical line where you cross from seemingly randomness to understated harmony… but not too far over that threshold. I like a pairing that has to be studied a bit and may challenge or even offend the eye at first. Then, as you drink in the space and really start to see things, there is an ‘Ah ha!’ moment. I think those spaces have more staying power.” – Ned Baker, Tamarian

The Selam Collection is one of the latest creative iterations from the fertile intellectual minds behind the firm Bereket. Starting with an extant and and well-loved—read as worn and of no serviceable value as an individual—rug fragment, the firm then stitches the piece to a larger antique kilim, typically made of hemp. This method, which is inspired by a similar technique museums use to mount fine textiles, elevates the all-but-discardable fragment, up-cycling it into a once again serviceable rug—or, to borrow even a bit more credibility, decorative wallhanging. Variable finishing, states of ware, and the one-of-a-kind nature of both the initial and finished pieces impart a certain traditionally-appealing charm, whereas the often asymmetrical composition hints at the modern. Each piece is a selam, which is to say it brings peace and harmony, while saying “Hello!” and inviting itself into warm kinship with its surroundings.

Whether it is the "liberal mind present in the manner of the composition” as illustrated by Dahlmanns, or the reminiscence "of the traditional motifs of this antique carpet and those of antique fabrics from rural areas of Russia” as arranged by Clarkson, each pairing "has a pleasing juxtaposition” which “starts to get the mash-up vibe going,” according to Baker, and as transcendently-illustrated by all three examples.

Selam is such a rich word, I don’t think it can be explained or understood in a standard form. What I understand from this word is “to be in the right relations with the creatures and the creator; as per the request of the creator.” And these weavings which I am trying to preserve by sewing them on hemp, I believe, most of them have been made by the people who were in this harmony; in the ‘selam’ state. So, the district of the pieces or where the hemp was woven has no importance from my perspective. The non-schizophrenic state of mind of the weavers has produced such a non-schizophrenic product, that if I can, I am trying to prolong their life a little bit more and pass this ‘selam’ of older generations onto the younger ones. Like a postman delivering the letters. Selam.