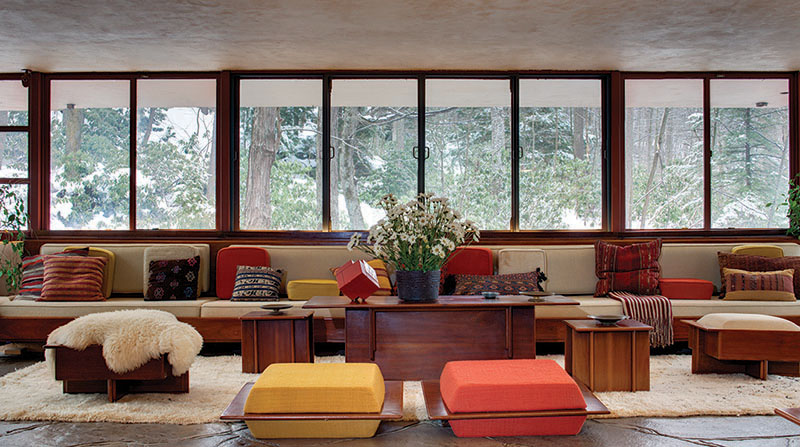 In the 2011 tome, ‘Fallingwater’—considered to be ‘the volume on the subject of this seminal monument’, editor and now retired long-serving Director of Fallingwater, Lynda Waggoner, has assembled written essays, photo essays, personal letters, as well as her own personal account of the history of the iconic masterwork of the man who at one time was considered ‘the world’s foremost architect’: Frank Lloyd Wright. As a monument, a museum that preserves the legacy not only of  Wright but of the clients for whom it was built—the Edgar and Liliane Kaufmann family of Pittsburgh—it is easy to believe that Fallingwater is a static testament worthy of the accolade ‘Best all-time work of

American architecture’ as voted in 1991 by the American Institute of Architects. However, the truth is far more interesting, more inviting, more impermanent. This is a look at the rugs and carpets of Fallingwater, not as individual objects, but as an embodiment of the essence of Fallingwater; a casual, ever-evolving living space well suited to handmade carpets.

‘We have thirty-one rugs in storage dating from the time of the Kaufmann family’s ownership which serve as the exemplars when we are looking for replacement rugs,’ explains Scott W. Perkins, Director of Preservation and Collections at Fallingwater, a program of the Western Pennsylvania Conservancy. ‘We also have a remarkable set of images from when the house was photographed for an Italian architecture publication, L’Architettura, in August of 1962. They form a photo essay that helps us define the ‘look’ of Fallingwater.’ Perkins is speaking to the fact that unlike many historic homes, Fallingwater invites its visitors to wander freely within the rooms while on tour, but asks guests not to ‘handle the museum collections, touch the woodwork and furniture or sit on the furniture during your tour.’ For the person who appreciates rugs and carpets, however, the policy affords the unique opportunity to experience the floors and the rugs just as the original occupants did: by walking on them.

The Living Room at Fallingwater, shown here in 1938, as the Kaufmanns were just beginning to settle into the home. A Beni Ourain rug is shown in the foreground of a still largely un-outfitted and un-accessorized space. Photo by Hedrich-Blessing.

Perhaps surprisingly, the rugs and carpets of Fallingwater do not reflect an aesthetic one might imagine in such a singular home designed by Wright. While the original drawings for Fallingwater did conceptually show the placement for larger custom-designed rugs, which mimicked the architectural

features of the home, the Kaufmanns opted to forego these larger options nominally citing their dachshunds as an excuse. The real reason proved to be a simple desire for informality, eventually realized in the form of a collection of Moroccan rugs. In fact, Edgar Kaufmann Jr., the Kaufmanns’ sole child and heir, is quoted as saying ‘No modern house of the 1930s was considered complete without berber rugs.’ His donation of Fallingwater was called by Waggoner, ‘one of the greatest acts of philanthropy of all time.’

In 1985 Fallingwater consulted with a ‘highly regarded museum professional,’ according to Waggoner in her book. The consultant recommended, among many other things, that barriers be placed between visitors and the collections, including, presumably, the rugs as well. This was antithetical to the wishes of Kaufmann Jr. who wrote in reply: ‘The art and objects should be treated decently and listed adequately, but always be in subordination to the real values present,’ concluding with, ‘I would rather see a dozen articles broken or stolen each year than infringe on the real character of a visit to Fallingwater as established by the Conservancy.’ As such, the Conservancy has always stood with the intentions of Kaufmann Jr., allowing visitors to wander freely within the rooms, experiencing it as ‘simple, human, and informal,’ the way he intended.

"Our tour guides routinely say to visitors, ‘Feel free to walk on the rugs.’ As many people are apprehensive about walking on them,” says Perkins. ‘This gives a great effect for the house, anchoring the spaces, tying it all together,’ including connecting the modern day visitor to the original guests of this casual weekend home from yesteryear—if you can imagine it being called that.

Fallingwater was built as a weekend retreat on property already frequented by the Kaufmann family of Pittsburgh. Edgar and Liliane Kaufmann had built their fortunes as owners of Kaufmann’s, Pittsburgh’s largest department store. With the encouragement of their son Edgar Jr., they commissioned what would become Fallingwater from Frank Lloyd Wright in the late 1930s. The main house and guest house were constructed in two phases and completed in 1939. Fallingwater replaced more rustic accommodations, elevating the style from log cabin camp to, dare one say, a singular dwelling with an inviting aesthetic all its own. ‘Rustic Elegance,’ to borrow a phrase from then curator Justin Gunther’s essay ‘Fallingwater’s Interiors: Rustic Elegance and Flexible Living.’

Gunther, who began his tenure as Director of Fallingwater in April 2018, also writes, ‘One might say the Kaufmanns were ‘tastemakers’ in Pittsburgh. They were never trendy and the things customers could find in their store were not the same as what could be found in New York City.’ He continues, ‘In buying for Fallingwater, the Kaufmanns collected with well-cultivated and confident tastes.’

In an untitled essay by Kaufmann Jr. appearing in Waggoner’s book, he recounts the family moving into the home at the close of the 1930s even though many details Wright had envisaged were ‘lacking’. ‘His [Wright’s] furniture layouts had always shown large carpets, even on the stairs. … By the end of the first winter we were sure that large floor coverings would only be stuffy.’ Whatever fully imagined designs might have graced carpets designed by Wright thus remains unknown. Regardless, as the homeowners settled into their weekend retreat Moroccan carpets came to be the defining de facto style for floorcoverings and today Fallingwater houses a collection of approximately ninety rugs which are used in rotation throughout the house. An additional fifteen to twenty replacement rugs which have reached the end of their serviceable life are also stored, adding to the reference collection.

Through the Kaufmann’s Department Store’s buying offices scattered throughout the world, the store offered customers exotic wares and likely allowed the Kaufmanns to source rugs for Fallingwater. ‘We have no information on the origin of the original rugs at Fallingwater, but it is likely the Kaufmanns used their considerable connections to source anything they wanted, including rugs,’ says Perkins, a sentiment echoed by Gunther. ‘Ownership of Pittsburgh’s largest department store presented the family with an almost limitless outlet.’ Further, and in order to maintain a bit of rusticity in a decidedly modern home, the Kaufmanns tasked the store furrier with producing pelt throws for the home, utilizing local skunk, raccoon, and fox. These throws joined sheepskins, flokati, and the Moroccan carpets in softening the home as well as adding ‘warmth to the space after the first winter,’ according to Perkins. 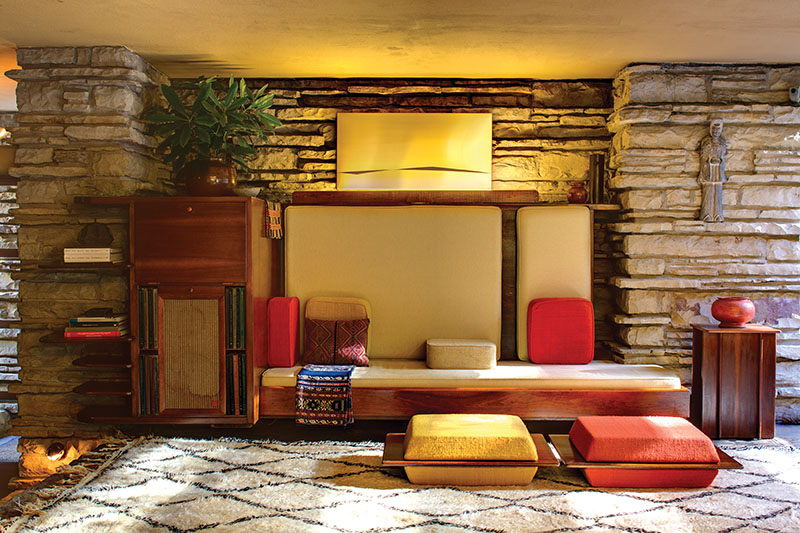 The built in music area of Fallingwater, shown here in 2010, with a Beni Ourain rug defining the space. Photo by Christopher Little.

There are two main types of rugs on the floors of Fallingwater: Beni Ourain, and the more richly colored embroidered kilims by the Moroccan Zemmour and Zainne tribes. Together these carpets reflect and compliment the signature palette of Fallingwater as designed by Wright.

Edgar Kaufman Jr. gifted Fallingwater to the Western Pennsylvania Conservancy in 1963 so that the ‘spirit of the place’ could perpetuate. He said, ‘The union of powerful art and powerful nature into something beyond the sum of their separate powers deserves to be kept living.’ This is the essence of Fallingwater. It is a living space, both literally and metaphorically, welcoming visitors to engage as much as practical with the space so its essence can live on.

As Fallingwater now welcomes over 170,000 guests per year, this means that the rugs and carpets are still subject to wear and tear far in excess of what Fallingwater would have experienced when it was a home.

‘You don’t understand: Fallingwater was our weekend house,’ began Kaufmann Jr. in direct reply to Waggoner apologizing for a Tiffany vase presumably broken during tours. ‘This is where all the things that were damaged but too good to throw away ended up.’ Incidentally, it was Kaufmann Jr. who had broken the vase and hastily glued it back together. It has subsequently been conserved properly. ‘This was a rational weekend house.’ says Perkins, though it should be noted it was a weekend house for those of considerable means and lifestyle. ‘It was for items cast off from the city.’ Utility was simply utility. 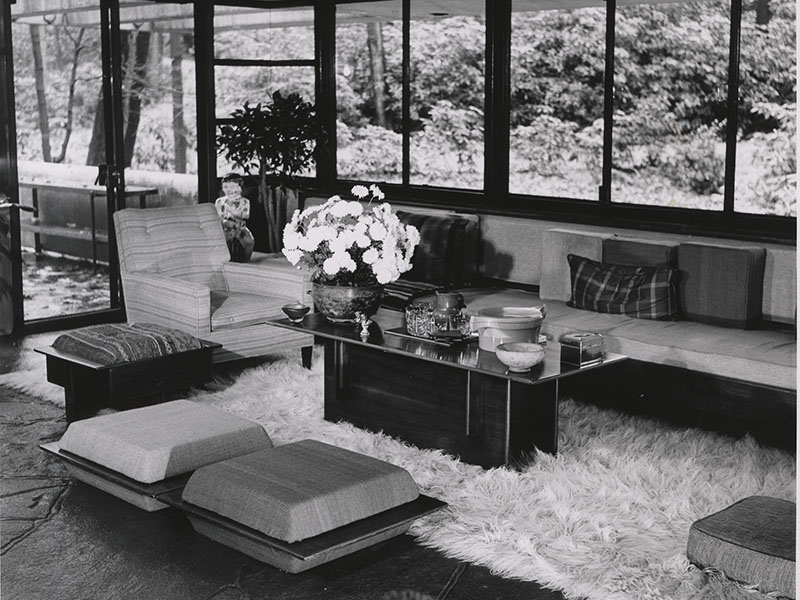 The Living Room of Fallingwater, shown here in 1962, with a large elongated rectangular flokati on the floor. Photo by Hedrich-Blessing. 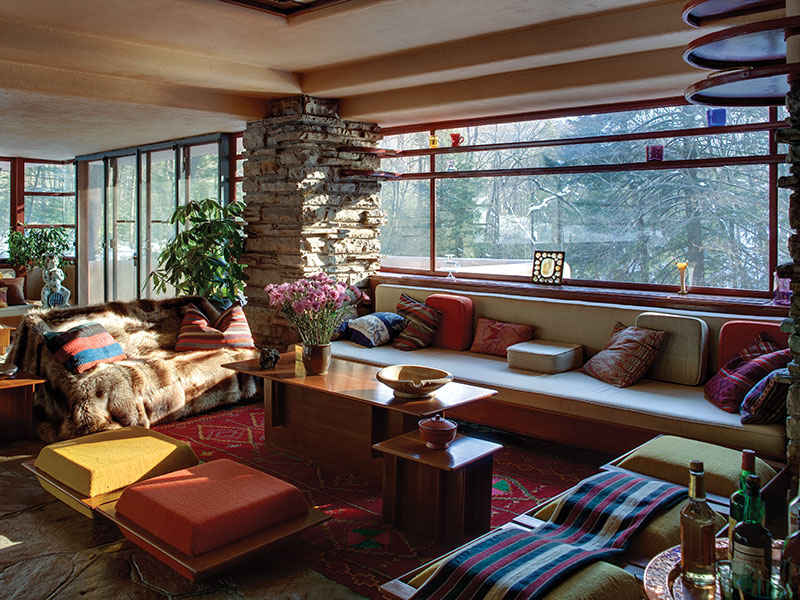 The Living Room of Fallingwater, shown here in 2010, with an embroidered kilim on the the floor. Photo by Christopher Little.

Kaufmann Jr. expressed a desire for the home and its collection to remain in ‘subordination to the real values present’. So too then must the rugs and carpets remain subordinate, even to the balance of the collection. ‘Regarding textiles,’ writes Gunther, ‘Kaufmann Jr. thought ‘rugs, bedspreads, upholstery, and other textiles that add color everywhere’ should be ‘restored and replaced’ to maintain the freshness and residential character of the house.’ The family frequently reupholstered and Kaufmann Jr. himself actively acquired many of the Moroccan rugs for the floors, the latter being a tradition curators continue to this day. ‘We recently had a broker source new production Moroccan rugs for the house,’ says Perkins. Using the aforementioned reference collections to roughly approximate the scale and character of the pieces, the Conservancy routinely adds carpets so that the freshness desired by Kaufmann Jr. persists, with the Conservancy last adding twelve or thirteen rugs to the rotating stock in 2015.

Kaufmann Jr. was no lackadaisical heir, and in fact, was exceptionally schooled in the ‘accoutrements of pleasant living,’ a phrase he used to describe the objects within Fallingwater. He studied art and typography in Europe, later studying with Wright himself. He was director of Industrial Design at the Museum of Modern Art (MoMA) as well as an adjunct professor of Architecture and Art History at Columbia University. In his role at the former, his greatest accomplishment is considered to be the ‘Good Design’ exhibitions of 1950-1955 which sought to promote good design in household objects and furnishings.

This desire to have well-designed accouterments of pleasant living might well be the tagline of any purveyor of domestic and household wares today just as one could easily paraphrase Kaufmann Jr. by saying that no modern house of the 2010s is considered complete without Moroccan rugs, given the current en vogue status of the form. The objects, including rugs, collected by the Kaufmanns for Fallingwater were not purchased with the intent of crafting a museum, a testament to a specific static time, rather they were ‘brought in to simply make things more personal’ wrote Kaufmann Jr. and were in a constant state of flux, rearrangement, and use. In the case of textiles including rugs, the concerns were not only decorative and enlivening, but also utilitarian subject to wear, to life, and to replacement. The Conservancy today attempts to convey this personal, living component of Fallingwater—‘the real values present’ as Kaufmann Jr. stated—through its stewardship and by welcoming visitors to experience the rugs of Fallingwater just as one should appreciate any other: underfoot.

ALL IMAGES COURTESY OF FALLINGWATER AND THE WESTERN PENNSYLVANIA CONSERVANCY.