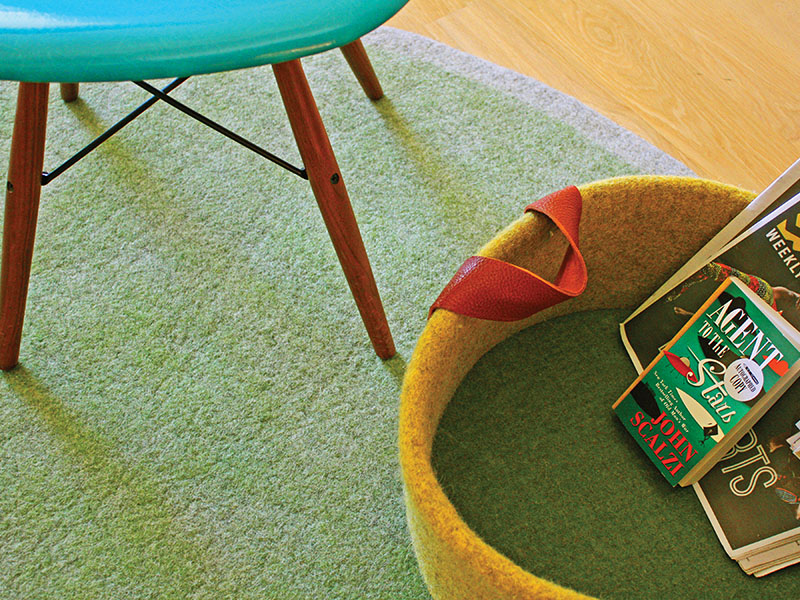 By standard accounts felt made from wool is considered to be the oldest known textile. Multiple cultures spanning the nomadic Mongol and Turkic peoples as well as those of Sumer lay claim to legends of the origin of felt. Catholic tradition even tells the tale of Saint Clement and Saint Christopher who—while fleeing persecution— stuffed raw wool into their sandals to prevent blisters only to discover at the end of their journey the sweat and constant beating of their paces had felted the wool.

While it is true felting may have been theretofore unknown to those Saints, by their time felt had existed in disparate regions for centuries. One noted extant example, a Bronze Age felt cap preserved at the National Museum in Copenhagen, dates the technical knowhow to at least 1500 BCE though it is thought the technique actually dates to some 6000 BCE if not earlier. Given the constraints and disconnect of civilizations of the era it is easy to appreciate how so many independent claims could be made, but perhaps none are as relevant as that of the Sumerian legend which asserts the secret of feltmaking was discovered by the likely fictional, Urnamman of Lagash. Regardless of its true origins, the importance of the ability to make felt has inspired people time and time again to tell its tale.

This story begins in 1999 with the gifting of a small felt rug, a namad in Farsi, that had been purchased in a craft shop in Tehran, Iran. Dodd Raissnia had returned to his native Iran for the first time since the revolution and traveled back home to the United States carrying a small oval namad with a linear floral motif. It was humble and utilitarian, folkloric and charming, and Melina Raissnia was immediately struck by it, falling in love not only with the individual rug but the technique itself. Her interest and fascination was so intense that she returned with Mr. Raissnia to Iran in 2002 in search of more felt rugs and more importantly, felt makers. The search proved almost futile save for the discovery of a small group of feltmakers including Asghar Aliyari, a master feltmaker who specialized in interpreting other artists’ designs. On the verge of dying out, the Raissnia’s set out to once again re-invent and revive feltmaking and so it was that Peace Industry was born adapting Ms. Raissnia’s designs into modern day versions of this time honored tradition.­­­ 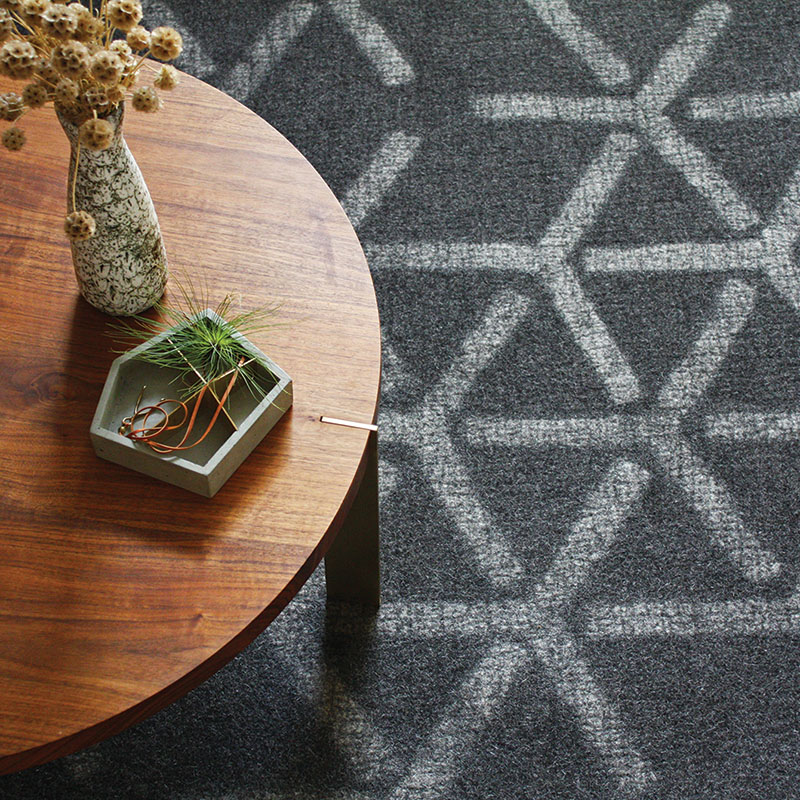 Feltmaking is a time honored Neolithic technology with countless tales of its invention. No matter when or where felt first arrived the technological advances of the Industrial Revolution all but rendered the craft of handmade felt obsolete. Peace Industry has revived the craft in Iran adapting the technique to produce modern handmade felt rugs of undeniable style and utility. Matrix, as shown above, is just one of their many contemporary adaptations of this technique.

Felting is a Neolithic technology originating sometime between 10,000 BCE and 2000 BCE, which predates any known example of woven or knotted carpet making. Its practice was largely confined to an area spanning the Balkans to eastern Mongolia, where it has played an important role in the lives of nomadic peoples. It was, and in some regions still is, used for tent coverings, clothing, blankets, rugs, and votive images. As a labor intensive craft, felt making developed into a specialized mostly urban profession servicing the nomadic populations with itinerant felters traveling established annual routes making felt for those in need. The work was done predominantly by men, though in Turkmenistan, it was the woman who did the work. Thick and durable, felt was also used by the Chinese for shields, as well as for making boats, and emperors would be carried upon large felt mats.

“It really is a little known Iranian tradition.” according to Ms. Rassnia. Shortly after the founding of Peace Industry, as Mr. Rassnia was again traveling in Iran in search of felters, he encountered the same story time and time again; five years ago there were fifty felters working and now there are only three. The ones that had managed to hang on had carved out a niche selling their rugs to the tourists, with an occasional commission from a fellow Iranian.

Ms. Rassnia also feels the felters all believed they were largely ignored by cultural and business institutions that clearly looked at felting as a lesser art form, especially compared to the highly reputed renown of Iranian carpet weaving. Sons were not encouraged to continue in the trade because of the stigma and while the Rassnia’s were conducting their research they were often asked, “Why?” when they expressed interest in making felt rugs. 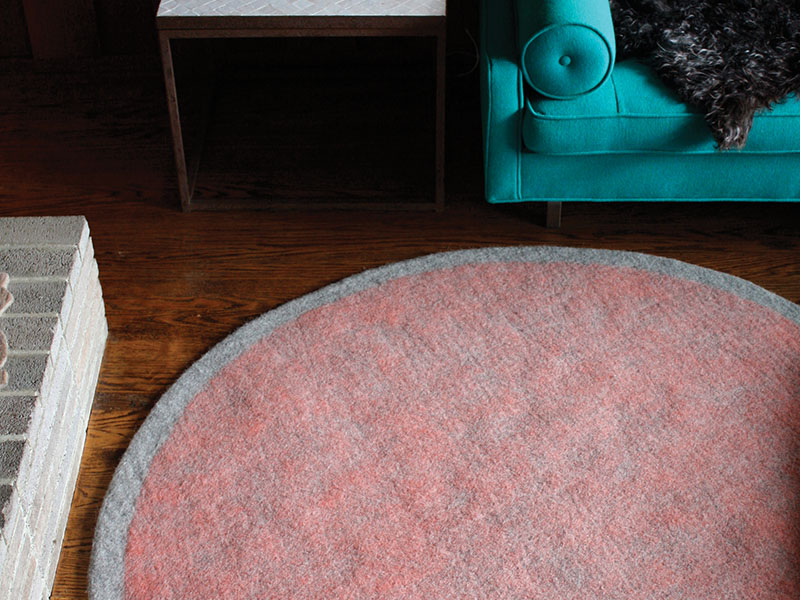 DELIGHTFULLY MODERN Felt rugs such as the piece from Peace Industry shown here in situ offer function and durability while combining an ancient technique with modern design sensibilities—a hallmark of mid-century design.

The why is a simple matter of aesthetics and function. The felted rugs now made by Peace Industry are made of carpet grade one-hundred percent lambswool, which is processed entirely by hand and dyed using a narrow palette of approximately twenty-five natural dyes before being felted into luxuriously thick (~3/4", ~19mm) modern rugs. The process is relatively simple, if not labor intensive. Wool is washed, carded, and dyed and then laid out a large tarp with the various colors arranged to create the design of the individual piece. The wool is then wetted with boiling water and the tarp is rolled, tied tight, and then manually agitated thus binding the course individual wool fibers together. This is all done in Peace Industry’s own micro-production facility located on the outskirts of Isfahan where they employ about thirty workers, all of whom they have trained in their revival of the craft.

Aesthetically the technique lends itself to Ms. Raissnia’s training as an abstract painter, her love of collage, and stenciling. It’s a marriage of technique and look that recalls the craftsman ideal of functional beauty merging it with a casual mid-century vibe. “When I started making felt rugs I was adapting my work into the rugs.” Begins Ms. Raissnia, “But as time has progressed I find my understanding has grown and I now design more to the technique. I went from artist to textile designer.” The carpets of Peace Industry embrace a more modern, naïve—yet not unsophisticated—look perfectly suited to the durable, utilitarian nature of the material.

“We produce a variety of standard sizes that we have honed over the years.” says Ms. Raissnia. “The felting process causes shrinkage so we had to learn what size to start with in order to have a finished 6'x8', 7'x7', 8'x10', and so forth. We also produce custom sizes, though our process is not always exact and we occasionally have to remake a piece to achieve the desired size. Any rejected rug is then cut apart and used to make our one-of-a-kind baskets and choobs.” Additionally, Peace Industry also makes a 4’x6' and 10' runner as well as a 5’6” and 7' round as their standard sizes. Custom sizes are available up to 11'x14' as a single piece, though larger are available with seaming. The baskets and choobs (ottomans) have a stylish contrast stitch and in the case of the latter are stuffed with upcycled fabric remnants. They are “all but indestructible” with a litany of household and commercial uses. An 8'x10' rug—which is reversible—from Peace Industry retails for about $3280 (USD) with custom rugs upcharged only for size changes. As a preshrunk wool product there is little concern for additional shrinkage during a proper cleaning and like all wool floorcoverings the rugs are easily spot cleaned using methods appropriate for the soiling.

For centuries if not millennia, felt manufacture remained a relatively crude manual skill, not dissimilar to the manner in which Peace Industry produces their carpets today, but that began to change in 1748 with the invention of the wool card, though it should be noted carded wool is used by Peace Industry as well. Subsequent decisive improvements in technology throughout the industrial revolution in the United Kingdom and the United States took felt from manual craft to industrial product, leading to the modern industrial felt industry which satisfies the global demand for a widening range of textile and mechanical applications of felt. This mechanization of handwork has all but banished manual craft feltmaking to history—its techniques and secrets all but lost—save for the few who persevere, elevating manual craft from necessity to art.

Peace Industry continues to explore the craft and technology of handmade felt working on techniques to incorporate yarns, finer detailing, fringe, and as homage to one of the origins of the craft, Turkoman reproductions that incorporate a different design on each side.

More information about Peace Industry and feltmaking can be found at peaceindustry.com. Modest wholesale inquiries are welcome.