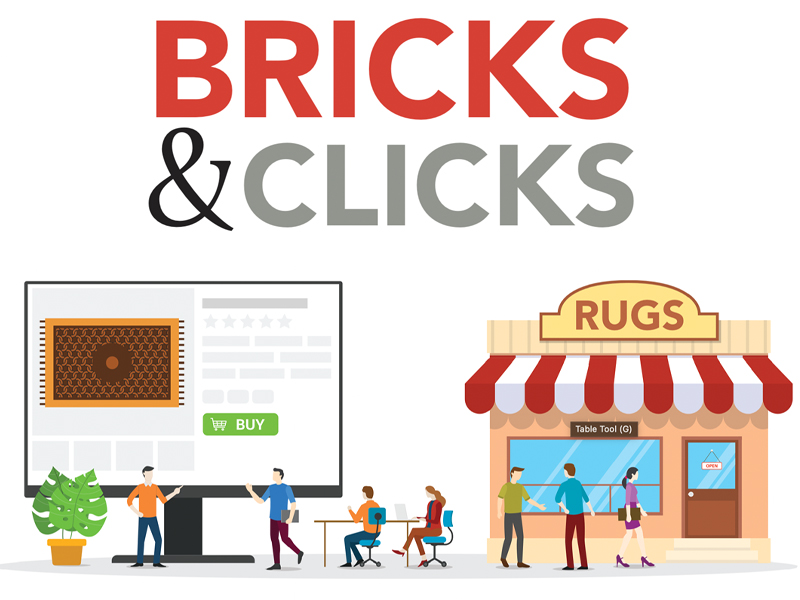 Rug Insider's InAntiques kicked off 2023 with a look at various segments of the area rug industry, running the gamut from high end hand-knotted antique rugs to more economically priced machine-made and tufted rugs. Regardless of which end of the price spectrum one is looking at, an increasingly important decision for buyers and sellers has become not just what type of rugs they want to what locations they want to buy them from.

Traditionally, area rug buyers gravitate to in-store, brick and mortar locations to source their desired carpets. In the past several years, particularly during the height of the pandemic shutdowns there has been a dramatic shift to online rug shopping. Unable to make the journey to a trusted rug vendor’s showroom, buyers instead made an online journey through various rug vendors’ websites.

“Is it more important to have an area rug showroom or an engaging website?“

Whereas the pandemic brought about the shutdown of many rug showrooms, some temporarily, and some permanently, the aftermath has instead seen a big uptick in investments brick and mortar rug locations. The home furnishing megastar, RH (formerly Restoration Hardware), has been running a highly successful business model in the way of establishing massive and elegantly appointed retail locations in major cities across the United States, with each location selling rugs, furniture, lighting, and more. One of their locations has become an anchor in New York City's Meatpacking District, and has helped to lead the revitalization of that district, and turn it into one of the hottest parts of the city.

Major names within the area rug industry have also established footprints in New York City, with Mansour from Los Angeles and Boccara from France securing significant showroom spaces in the posh Upper East Side. Loloi and other top brands set up new bases further downtown in the vicinity of the famed Textile Building on Fifth Avenue.

The increased push into brick and mortar showrooms has also coincided with an equally big investment into area rug websites and other online rug sale portals. The aforementioned vendors all have strong websites, but some other companies have focused more squarely on the digital realm than on the physical one.

One of the big newsmakers in recent months has been Ernesta, a new venture from the former CEO of Peloton, which will be launching this Spring, as they have invested $25 million in a custom rug venture that will initially be based online, and work in a direct-to-consumer model.

Top online locations where area rugs are sold include Amazon, Wayfair, Chairish, One Kings Lane, Ruby Lane, Etsy, eBay, Houzz, and more. Individual rug companies have also moved further and further into the digital space, with even more area rug companies at all ends of the price and antiquity spectrum displaying their complete collections online, increasingly with pricing and online checkout available.

This concept has also borne itself out in online auctions, with longtime auctioneers Sotheby’s and Christie’s stepping back from running regular area rug auctions. Other rug-focused entities like Nazmiyal Auctions, Material Culture, and 1st Bid Auctions (not to be confused with 1stDibs, which also has online auctions) running successful online rug sales every couple of months.

So which one is it? Is it more important to have an area rug showroom or an engaging online website?

In the past, and the present, one of the keys to success is a big, beautiful brick-and-mortar showroom in a prime location to showcase your products. ­At the same time, there is an increased emphasis on having an eye catching, full-featured, and easy-to-use website, so people around the United States and beyond can shop your inventory day and night—24-7-365.

A rug industry veteran I was recently speaking with summed it up best. He said, “It used to only be about the Bricks. Then, it was all about the Clicks. Now, the Bricks don’t mean as much unless it’s Bricks AND Clicks.” I couldn’t have put it better, myself!