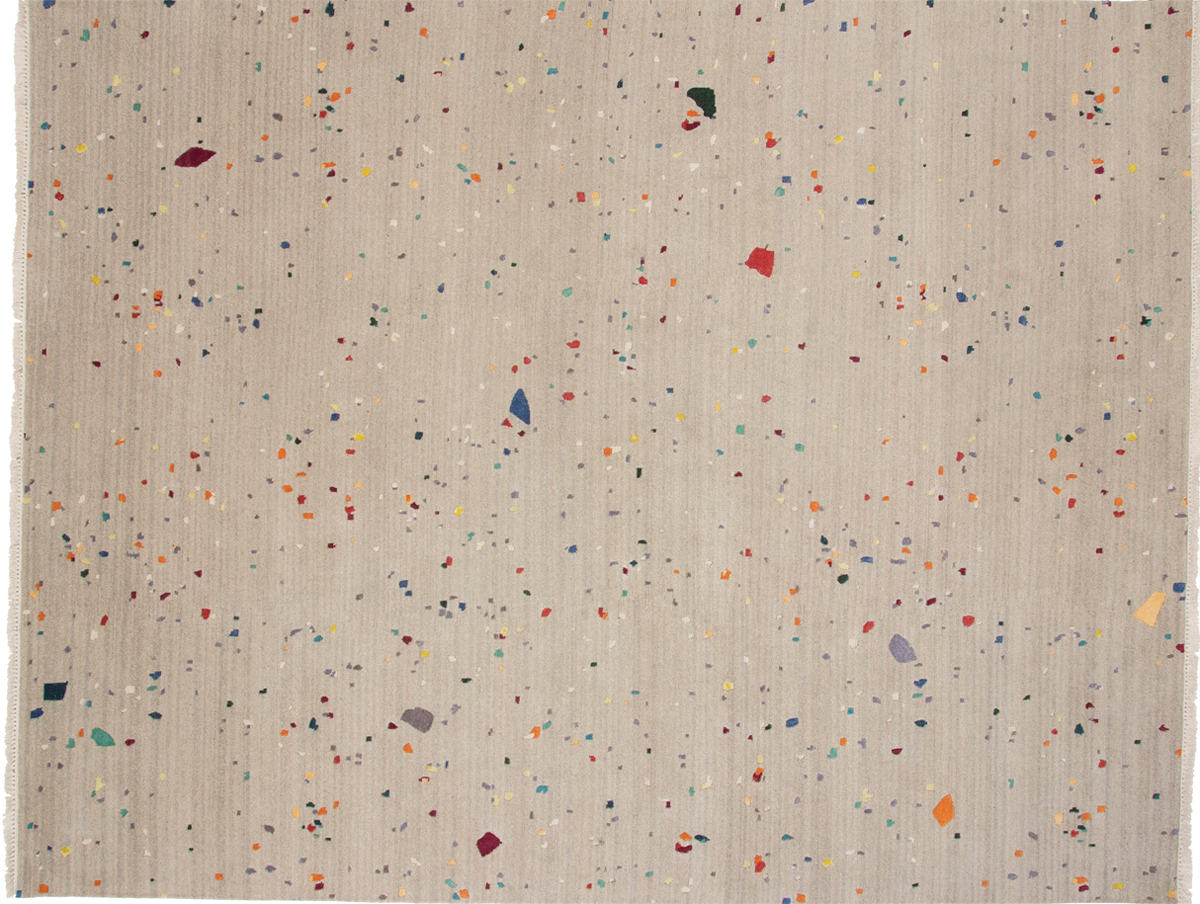 Designed by Garth Roberts, cc-tapis’ After Party carpet recently won a coveted German Design Award. The design— inspired in part by post fete confetti on the floor—reminds of the Memphis Design Movement of the 1980s, terrazzo flooring, vinyl composite tile (VCT), and one might argue, an updated and revisited Desert from Odegard Carpets.

Everything moves in cycles, especially aesthetics and design.’ begins Fabrizio Cantoni of Milanese-based international carpet house cc-tapis. ‘We pride ourselves in producing contemporary rugs but most of our rugs take inspiration and are influenced by the past. For example our ‘Lost in the Fifties’ rug was inspired by the work of Italian architects in the 1950s, however the original inspiration came from the flooring of the Cappella Sansevero in Naples which was built during the 15th and 16th centuries.’ After Party by comparison came from designer Garth Robert’s ongoing exploration in randomness and what he calls expressive aesthetics. ‘After some soul searching my idea was to develop a concept that moved away from the illustrative / pattern nature of the rug. I aimed to convey a mood with the rug's visual that was not overshadowed by a contrived graphic idea.’ Robert’s explains before conceding a visual explanation is better: visualize confetti on the floor after a party.

While the inspiration may have been relatively commonplace, the refinement and execution of the design elevates it beyond the pedestrian. ‘The thing most people don't realize is often the collaboration that is realized between company and designer is what results in a product being greater than the sum of its participants. In the case of the After Party, the collaborative energy was quite special.’ Robert’s states.

This collaboration includes working with cc-tapis designer Daniele Lora who sees a bit of the 1980s in resurgence. ‘Patterns and textures such as the ‘terrazzo’ pattern utilized extensively by the Memphis Design Movement in the 1980s are showing in all areas of design from textiles to furniture to lighting and even the After Party rug takes inspiration from that movement. The design appealed to us as it conveys a mood and a feeling. The design lends itself perfectly to the handknotted technique which adds to the haphazard and non-uniform aspect of the design.’ Lora concludes.

It is this same ‘haphazard and non-uniform aspect’ of patterning that inspired the creation of Odegard Carpets’ Desert rug over two decades ago, though the source of the inspiration is disparate. ‘We based that design off of an old Moroccan carpet’ says Peter DeMarco of Odegard. Given the current revival and interest in Moroccan carpets, it’s then easy to see parallels between the aesthetic appeal of After Party, Desert, and a Beni Ourain rug, though it should be noted each conveys a different feeling. ‘I do find it interesting that the rugs seem to share a direction but at the same time express an entirely different aesthetic outcome.’ says Robert’s when asked to compare Desert to After Party. ‘When one allows oneself to feel the subtleties of intention and context of each of the three items the differences are far more than just color, visual texture and period of production.’ The answer to the question ‘How does carpet make you feel?’ or more appropriately ‘Would Desert, After Party or a similarly patterned Moroccan convey the same feeling in a space?’ reveals why each is important and reflective of its time, place, design movement, and zeitgeist as Robert’s hints: ‘I think that for better or for worse we as humans will be bound to repeat ourselves. What I find most interesting about the recurring cycles is the context in which they resurface and the catalysts that encouraged their resurrection. I feel that these areas of the creative cycle are what make the difference between a creation being retro and neo, while others are recognized as new.’

Just as Cantoni specifically referenced the repeated and iterated cycles of inspiration, he also adds that what distinguishes cc-tapis and Odegard and other notable companies as well, even in the reinterpretations of patterns and designs, is what he and other Italians call ‘il buon gusto’. Not simply ‘good taste’ nor ‘tastefulness’ nor ‘decency’ but an entire approach to aesthetics for cultures permeated by history. As Robert’s succinctly states: ‘I am quite sensitive to social cycles. I am also aware that they often return with a twist.’

Photography: Image of Nima Desert courtesy of Odegard Carpets.
Images of After Party courtesy of cc-tapis.