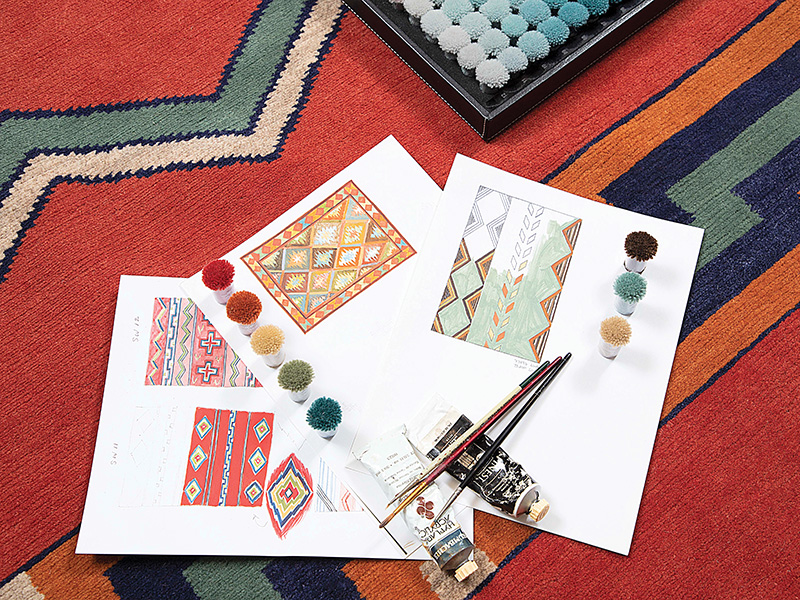 Conceived at the forefront of the Luxury Lodge aesthetic, the Mesa Collection from New Moon Rugs serves as a quintessential example of adapting native forms to suit to the needs of contemporary interiors. As the collection enters its third decade, Rug Insider talks with firm founder John Kurtz and current firm principal Erika Kurtz to find out what has kept the collection at the ever-shifting vanguard.

The United States has been called “the great melting pot” but in truth, the aesthetics and regional styles of the country have never been as homogenous and uniform in taste as one might imagine. Spanning the breadth of a continent and populated by people from myriad and diverse backgrounds, the United States has long been an imperfect amalgam of its constituent components—the only thing truly quintessential about American design being perhaps its ability to observe, adapt, and make relevant the art forms and craft of both its native inhabitants as well as those immigrants who came thereafter.

“If something is going to be exalted, let it be art.“

New Moon’s iconic and oft-imitated Mesa Collection—as much as one can imitate an aesthetic itself borrowed— was born strictly as a Navajo blanket-inspired collection. In the almost two decades since its introduction it has grown to incorporate design elements and inspiration from a multitude of tribal cultures. Now incorporating elements and inspiration from Mexican tapestries to Moroccan rug motifs, as well as from Turkish Ikats and African Kuba cloth, the collection has ripened from its roots as homage to the “most powerful and original art created in North America,” as the Navajo weavings are described by New Moon founder John Kurtz, into one which honors the full scope of American design inspiration. “Our newest designs are Scandinavian inspired,” says Erika Kurtz, second-generation principal of New Moon. “Even though they [the designs] all come from completely different cultures, they all complement and coordinate with each other in a beautiful way.” 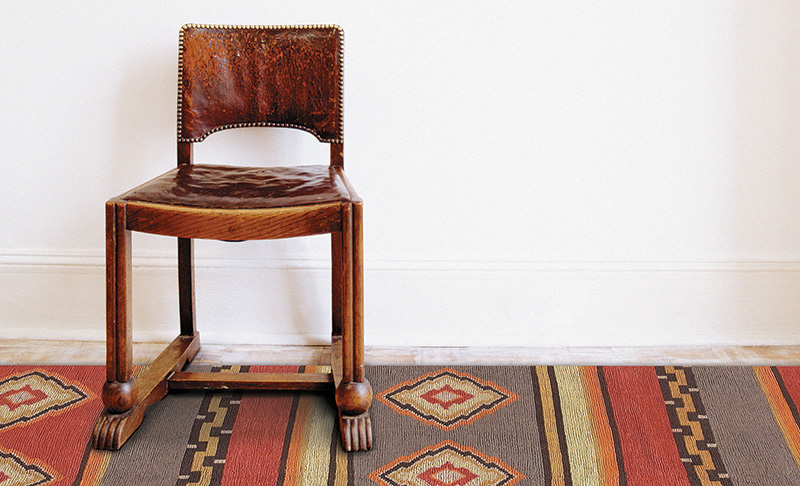 “We were trailblazing a new floor aesthetic that possessed the sparse and raw artistic power of minimal design.“ — John Kurtz

“When I was designing the first carpets in the collection, Navajo weavings and their aesthetics were still unexplored territory for the masses, without the collectable cache they now have,” begins John Kurtz. “William Randolph Hearst had a collection as does the Textile Museum in Washington D.C.” But even for those with a keen eye toward the beauty of the weavings, one problem remained: functionality. The extant classic period Navajo weavings are flatweave in construction technique and while of course a flatweave can be used on the floor, a pile carpet offers more wearability. “The original Mesa Collection combined Native American design impulses with my own sensibilities to create a usable, functional, pile carpet which then protected the Navajo weavings,” allowing them to be moved from the floor to the wall, and enter the realm of the collector.

At the same time, a “lightning strike of time and place” occurred with the then-burgeoning growth of Tibetan weaving in Kathmandu, Nepal. “We were trailblazing a new floor aesthetic that possessed the sparse and raw artistic power of minimal design,” says the elder Kurtz. These were the nascent years of what has since grown into the so-called Luxury Lodge look in American design. “Our first showing of the collection was in Atlanta [at what was then the North American Rug Show organized by the Oriental Rug Importers Association and AmericasMart] and it immediately clicked with buyers from the Western United States.” It also resonated in the Northeast, as the Adirondack Camp style had long incorporated a marriage of forms and cultures steeped in the cowboy and Native American traditions.

“The Mesa Collection really embodies the ethos of the Luxury Lodge design movement, which is an inherently American look rooted in the traditions and mythology of the pioneer spirit,” begins Erika Kurtz. “The homes of the American West and Eastern mountain regions have a rustic charm and sensibility that begs for the simple, geometric motifs and earthy tones that have become the hallmark of the Mesa Collection.” 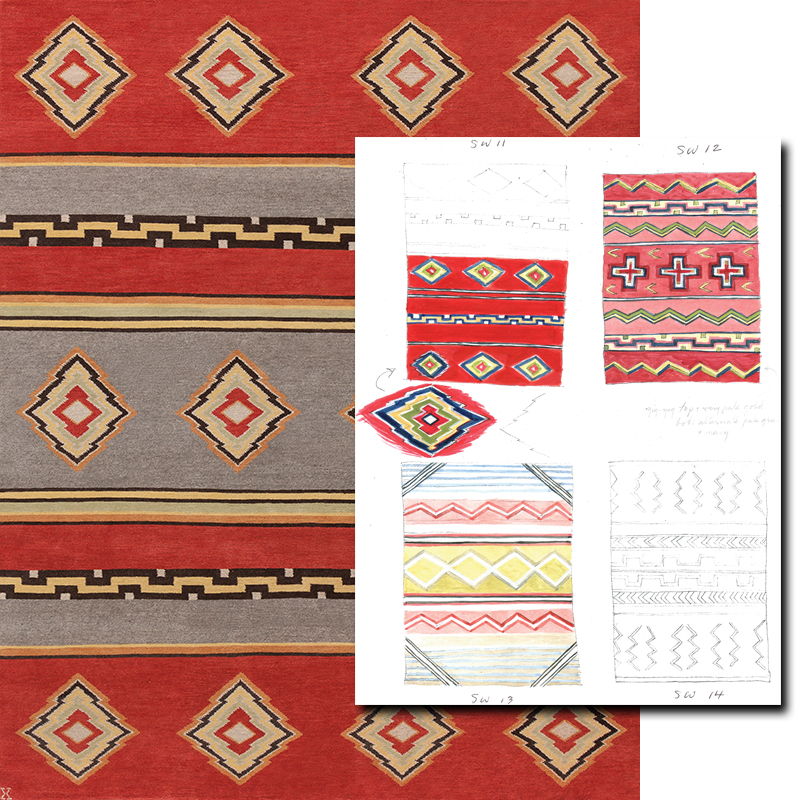 Above, an exemplar of the Luxury Lodge aesthetic which it helped define, LW11C from new Moon’s Mesa Collection recombines traditional indigenous elements into newfound works suited for the homes and lifestyles of today. Inset: A vignette into the design process which bore the Mesa Collection, these drawings capture the sparse and raw artistic power of the minimal design upon which the collection draws its enduring charm and beauty.

The younger Kurtz continues, “I think that, for most of these spaces, the homes have to be designed for all four seasons, with an awareness of cold winters. From a design standpoint, Tibetan rugs, with their rich pile and beautiful wool have a warm, grounding, cozy feel that just isn't available from a flatweave. They invite you to sink in and make yourself comfortable.  At its core, this is what the Luxury Lodge spirit is all about: creating a space from floor to ceiling that celebrates nature and natural materials, fine craftsmanship, community, and personal style.”

By taking a “riveting and elemental indigenous art form” which remains “simultaneously apparently modern” and then making it their own, New Moon continued the tradition from which those Navajo weavings originated. Earlier Western traders tried to intervene in weaving in the United States and it is easy to see similarities between Navajo and say, for example, Caucasian weaving. “The Navajo took ‘oriental’ inspiration,” states John Kurtz. Moreover, by embracing and proclaiming quality of materials and craftsmanship, as well as technique and design, the Mesa Collection celebrates a vibrant heritage and culture without “junking it up” as John Kurtz says.

“It was a pleasure to design the Mesa Collection and likewise easy to channel the Navajo aesthetic from the classical period. The first ones were the easiest as I recombined elements, imagining what a female weaver would do,” states John Kurtz. While New Moon was never attempting to duplicate per se, this is not necessarily the case in this era as “Others may try to duplicate the look (and good on them),” says John before concluding “If something is going to be exalted, let it be art.”

“Since we launched the Mesa Collection approximately twenty years ago,” Erika Kurtz points out, “the Luxury Lodge look has really grown and flourished, and a lot of designers have entered the market with their own versions of the look. I think that one of the things that continues to set us apart as leaders in this space is our constant desire to bring fresh new designs to market, inspired not only by Navajo designs and western motifs, but tribal motifs from around the world. Many companies are focused on creating direct copies of existing antique Navajo designs. Where we really excel is in taking traditional elements and reworking them into something unique and unexpected.”

The aesthetic of the Mesa Collection began as a decidedly American affair—a successful attempt to adapt, translate and channel the Native American creativity in much the same way as those same indigenous peoples adapted other weaving styles from afar. Over the course of time further adaptations have occurred and new inspirations have entered the mix. What remains unchanged is an unrelenting desire to create honest, original work composed of elemental forms which gives rise not to wholly new designs, but to those with an apparent connection to the past while projecting an air of modernity.

Perhaps this is a further channeling of the raw power of which the elder Kurtz speaks so fondly.