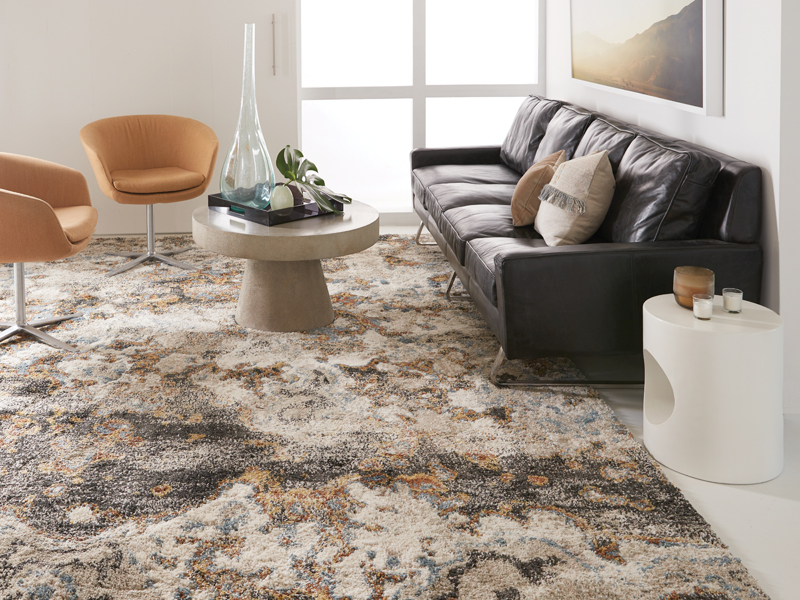 For almost a century the American firm Karastan has been providing the style and functionality demanded by American consumers. In examining their history and ethos, Rug Insider wonders what can be learned.

Industrialist Henry Ford has long been the recipient of accolades praising his creation of the assembly line and for innovating production in order to provide design within reach if you will, long before a certain current business co-opted the term. Bringing design within reach, or to the masses, is perhaps the single most praiseworthy effort any company can aspire to achieve.

After all, whether it is a car or a rug, each of us as consumers aspires to have the niceties associated with civilized society—however we individually define those wares. This is a hallmark of the bounty of America and it is one shared by the rug firm Karastan.­­

“One thing people don’t realize is that the first Karastan rug came off the loom before the Model T finished rolling off the assembly line,” said Kelly Moore, Senior Vice-President of Mohawk Home, parent company of Karastan when asked to give an “elevator pitch” describing the iconic brand. From those days contemporaneous with the Model T, through two world’s fairs promoting the “mystery” or “wonder” rug, Karastan has been a company renown for bringing style, color, and performance to American consumers. “Karastan is a luxury brand associated with the best machine-made rugs. Ones that simulate the look of handmade,” says Moore.

The impetus was, as it so often is, one of devising a way to provide customers, in this case mass consumers, a means to access the style of a hand-knotted rug but at a price point far more accessible to most. While the Karastan discussion of this need spans almost a century it is one the company and indeed the industry still faces as demographics and consumption patterns shift. 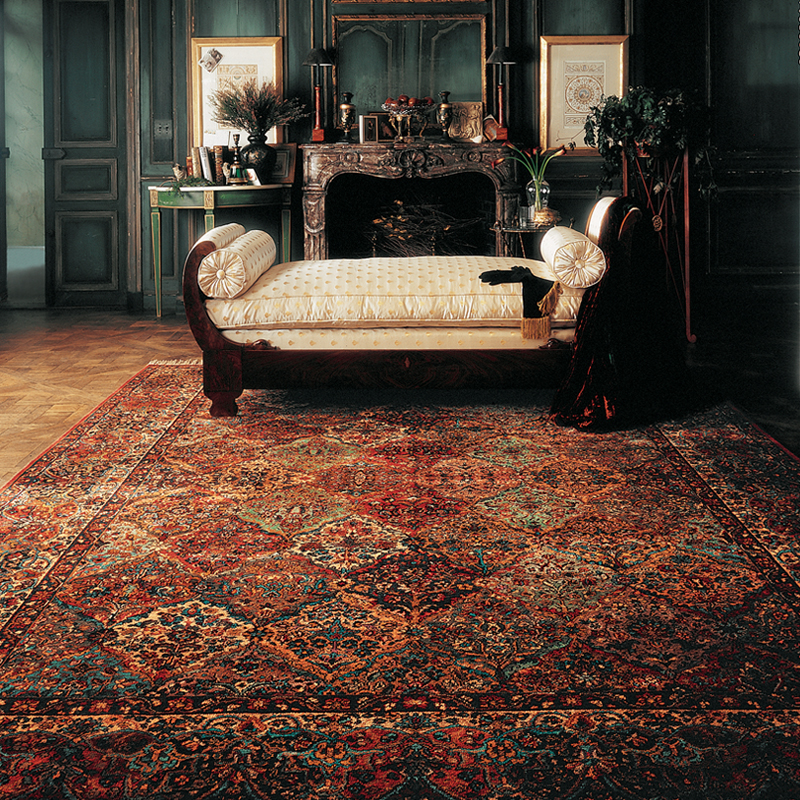 Karastan began by providing a high-quality machine-made alternative to the traditional so-called oriental rug. Some styles such as the classic Panel Kirman shown above have endured since their introduction.

Beginning with what was once a stalwart of American consumption the story goes that the Chicago department store Marshall Field & Company, working in a South Carolina carpet mill, pioneered in the 1910s what would later be called “The Mystery Rug” when it debuted in 1928 under the Karastan moniker. Its tours at the world’s fairs included not only the ability to see the rug and all of its manufacturing “wonders,” but also the ability to walk on the rug; and it was walked on, a lot. In fact, millions of visitors across the fairs did indeed tread upon this modern marvel, thus cementing into the then burgeoning consumer class of Americans the notion of Karastan as a quality, durable, practical, and as equally important, stylish brand of rug. It also didn’t hurt that it was made in America and that once cleaned, it retained its original luster.

The technology of this era is such that numerous innovative fiber types are now featured in Karastan products.

“Made in America is a core philosophy of Karastan,” adds Moore while discussing the firm’s rugs. “Over time we have had to remain responsive to consumer trends.” Whether it is by the introduction of synthetic fibers, the first Karastan rugs were wool and the firm still produces many in the natural fiber, or via the firm’s dutiful attention to the balanced needs of “timeless design versus the personality of the home,” as Moore states, Karastan has remained focused on using the technology of the era to provide both design within reach and design that suits the needs and wants of consumers. 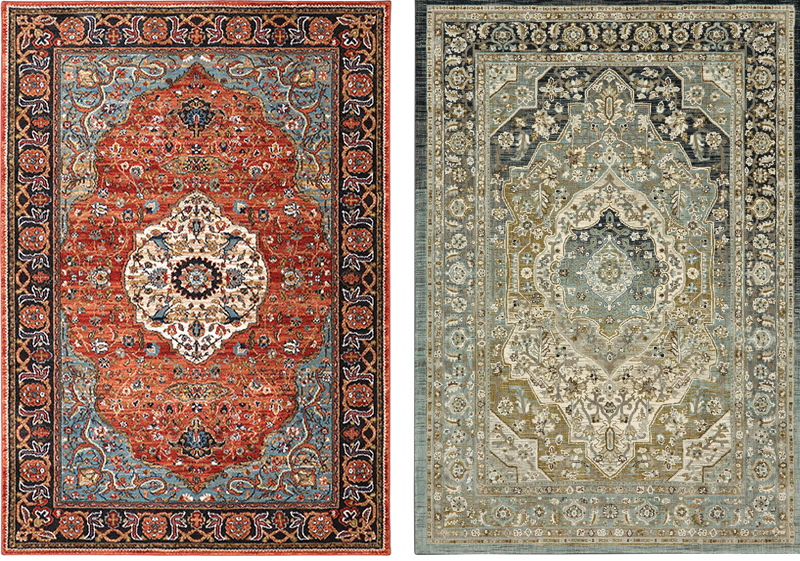 Modern adaptations of traditional designs such as Karastan’s Petra (above left), bridge tradition and modernity by combining classic style with novel materials such as the firm’s EverStrand fiber. Nore in colorway Jadeite brings updated and on-trend colors to classic design.

The technology of this era is such that numerous innovativ­e fiber types are now featured in Karastan products. This includes SmartStrand® as well as EverStrand™ fibers which offer high-performance stain resistance as well as the benefit of being recycled respectively. Paired with the fact that Mohawk is the largest recycler of plastic water bottles in the United States and it is apparent the firm remains adaptive and sensitive to consumer trends. “One of the things you may not know is that the water bottle of today is far better than the one from ten years ago,” begins Moore. “Better quality polymers have allowed industry to create thinner, stronger bottles while at the same time making the recycling process easier with a better resultant fiber.” These fibers, along with wool, are then used to create Karastan brand rugs and broadloom.

Moore was also very forthright in addressing the end of use of a Karastan rug. “The logistics of cradle to grave design are very difficult,” states Moore when asked about the recycling of a fully synthetic fiber rug. For those unaware, cradle to grave design is a concept in which the design process of a product must take into account each step of its lifespan, including disposal or ideally, recycling. The difficulty Moore speaks of typically lies at the end of use or end of life when the consumer goes to dispose of the product. The how and where left to myriad factors too numerous to list. “It’s not yet cost effective to create a circular design process for our rugs, but research and development are progressing,” adds Moore.

Beyond the technology of the time however, Karastan must remain in tune with consumer trends which of course means keeping a finger on the pulse of consumption. “Color, then pattern, then styling,” are the three things consumers of Karastan carpets look at, according to Moore who then adds that “life friendly,” meaning carpets that consumers feel comfortable using around children and pets, is a key factor for both the design and consumption of Karastan products. Moore also notes that while “Made in America” has held its value to the firm, it is now behind all other factors consumers consider when purchasing. “Made in the USA and our sustainability initiatives close the deal for undecided consumers,” notes Moore.

When asked to identify elements from their business that have provided the firm stability and growth through the years, Moore is quick to utter a phrase familiar to many in the hand-knotted and beyond rug trade. “We would have been unsuccessful if we were to race to the bottom,” Moore states, adding “Cheap is the fastest way to close your doors.” By focusing on the better/best price point for machine-made wares, by offering quality commensurate with the aforementioned pricing, by thinking strategically in their exposure to ecommerce thus avoiding over-saturation, and by offering versatile products, Karastan has remained successful for almost a century.

In closing and within the context of the “Made in the Americas” theme, Moore was asked to summarize Karastan’s position on trade and tariffs. “Ninety-five percent of our products are made in the United States and we are vertically integrated across all fiber types. Karastan is positioned well against such exterior threats to our business.”