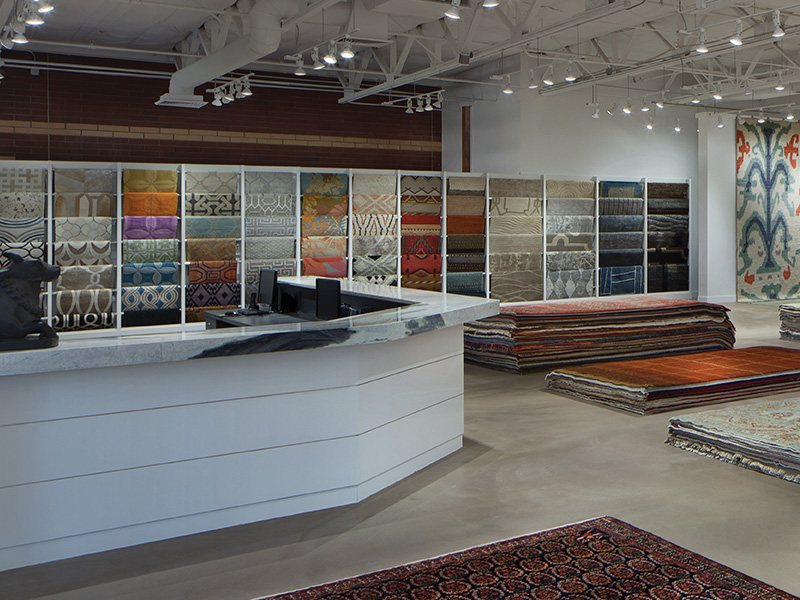 A new endeavor spearheaded by Steve Cibor of Tamarian and already much discussed within the industry is set to go live this winter. With it comes the possibility of revolutionary change to the way retailers source and sell rugs from inventory. It is The Rug Club, and RUG INSIDER has the details.

The longer one remains in any one industry, the more apparent it becomes some of the presumed universal truths of the industry remain simply because of inaction to change them; comfort is after all found in the familiar and routine. Oft uttered as an excuse to avoid further purchases just as it is boasted of in different circles when promoting a particular showroom’s vast selection, large inventories—specifically those in excess—have been, and continue to be a hallmark of the handmade rug and carpet industry. But to what end?

To the uninitiated it might seem a large inventory of carpets to be beneficial to both the merchant and the consumer, and to a degree it is. A greater number of pieces inherently offers consumers more choice, but as anyone who has ever worked a retail or trade-only sales floor with a customer knows, satisfaction is only to be had if the so-called perfect carpet can be winnowed from the selection at hand. Perhaps when the quintessential red/blue Iranian carpet dominated the marketplace this was a relatively easy task.

Yet now, as the industry has embraced custom carpetry, fashionable trends over enduring style, and rapidly if not seasonally changing aesthetics, retailers and consumers face a near herculean task of finding perfection, within their own inventory, in the fleeting time allotted. As Murphy’s Law is a bedfellow of salespeople everywhere, even if said gem is “found”, it may be sized at 8 x 10 when what the client wants is a 9 x 12. It is of course possible the client may wait for a 9 x 12 to be woven, but that assumes the rug is still in production. If it is not, all of that tedious searching, that waste of everyone’s time, will be for naught as the now disappointed customer continues the search, perhaps at another retailer, perhaps even repeating the same fruitless process. This freshly minted tale, while hypothetical, is far from fictional.

“How many times has a dealer had a now discontinued rug in their inventory and needed another size?” rhetorically asks Steve Cibor of Tamarian Rugs as he begins explaining his latest venture. “Sure he might check with his supplier to see if they still have one in the needed size, but if they don’t, he’s out of luck. How many other dealers out there may be in the same situation? Does one of them have the size another needs? What if there was a way for all dealers to have access to all other dealer’s inventories?” In short, this is the raison d’être of The Rug Club: To facilitate the sale of physically extant rugs and carpets by means of a consolidated inventory listing built from those of participating dealers, made available to any other participating dealer.

Phase one of the new system goes live this winter and will - as alluded to fictitiously - be comprised solely of programmed rugs, or more accurately formerly programmed rugs, submitted by individual participating member retailers. This will provide another means of closing a sale for savvy dealers willing to participate. “It’s an extremely viable idea. In theory, it sounds good as every dealer has unsold inventory,” begins David Adler of David E. Adler Fine Rugs in Scottsdale, Arizona, who continues, “It’s creative, and while traditional sources for selling rugs are good, so is innovation.” Phase two of The Rug Club will endeavor to add one-of-a-kind rugs to the database, while an eventual phase three will add antique carpets.

“We had to start somewhere,” said Cibor “And starting with programmed rugs made sense as the data—in theory—is more uniform and structured.”

“If anybody can do it, Steve [Cibor] can,” said Alex Farahan of Cyrus Artisan Rugs in Bloomington, Minnesota, just outside Minneapolis, when asked about his participation in The Rug Club. “His biggest challenge, and he’s told me this himself, is going to be ensuring the quality of the data he gets from the retailers. If the data he gets and maintains is good, The Rug Club will be a ‘win-win’ for all involved.”

Once operational even in its initial form, The Rug Club promises to innovate as Adler states, but if, no, once it reaches its full capabilities the results have the potential to be revolutionary. As member of the Rug Club will have full immediate access to the entirety of rug inventories held by dealers throughout North America, no longer is a retailer just selling from their own stock, they are selling from anyone or everyone’s stock. “We are always looking for rugs, often times for things we’ve previously had in inventory,” says Adler. In a way, this harkens to an earlier era in the North American rug trade when importers were clustered around the historic, and now largely dismantled, rug district in New York City. One importer would call, or walk over to another seeking to find a rug or carpet to meet the needs of their retailer. With the technology of today, that inquiry can be made electronically, and moreover with The Rug Club can be made on a scale heretofore unimagined.

“The Rug Club will enable everyone to locate a stock rug [if it exists] for their clients. It’s a wonderful idea!“ — Alex Farahan

Returning now to the other talking point on large, excessive inventories: the notion that a glut of inventory prevents a company from making investments due to capital essentially being sequestered in non-fluid assets. By facilitating a means to move, that is to say sell, stagnant inventory The Rug Club has potential to re-invigorate the rug business in North America. “Dead inventory is the biggest problem of the rug business,” states Farahan, whereas Adler makes a more self-deprecating statement which acknowledges a so-called unsellable rug in Scottsdale, might be a hot seller in a different market, “Our boneheaded mistakes can be a benefit for others.” If a dealer has perhaps a few hundred thousand, a million, or dare we speculate millions of dollars tied up in stagnant inventory, just imagine what could be done if that cash was once again circulating either within the industry or in the economy in general. “What do you think the total value of stagnant rug inventories amounts to?” asks Cibor, again rhetorically, “It must be billions of dollars.” Now just imagine all of that cash doing something other than sitting in a warehouse.

“Who knows what a dealer will do with this newfound cash?” asks Cibor who further speculates that dealers will likely take half as profit while re-investing the remainder back into the business. Whether it is used to remodel a showroom, buy into a new rug line, expand an existing line, or even just pay for a vacation, money moving through the economy is more beneficial than not, and that is the primary goal of The Rug Club; “the loosening up of cash,” as Cibor states.

The Rug Club is built upon principles that have well served Cibor and his firm Tamarian over the years. For example, Tamarian has long supported its dealers by exchanging stagnant inventory thus ensuring the mix within one particular showroom is appropriate for that market. Furthermore, they use data analysis and automation to ensure decisions made by the company are sound. These same principles are to guide The Rug Club as the consolidated inventory will act as a means for dealers to ‘refresh’ their inventories, either by selling older stock or through its synergistic counterpart, reconverting that same older stock into something which can once again be sold from. “We have a high level of confidence in Steve [Cibor] and Tamarian,” says Adler before adding “We are hopeful it will work to find buyers for the ‘hidden gems’ in our inventory that have been waiting to move on.” 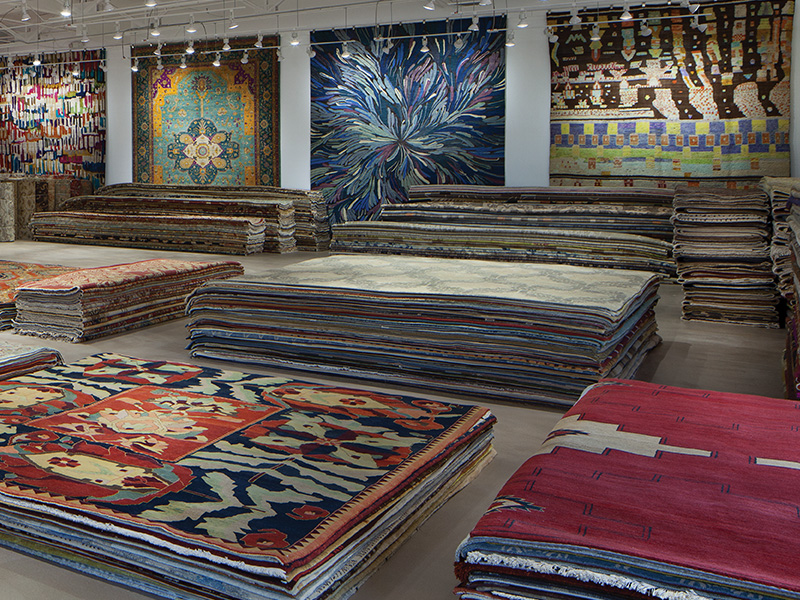 The financials for The Rug Club are appealing, non-oppressive, and designed to ensure quality dealers are participating in the program. Much like any other membership service or buying club there is to be a monthly maintenance fee, the exact amount of which has yet to be determined. There is also a modest fifteen percent (15%) brokerage fee, a commission if you’d rather, charged on all sales facilitated by The Rug Club as well as an estimated four percent (4%) fee for credit card transactions. Shipping costs are to be paid by the buyer. To further establish trust in the quality of goods sold by way of The Rug Club, a rating system gauging quality, performance, and the like is to be implemented. Those who maintain a well-groomed list of good quality inventory, in good condition, with quality images, and those who provide timely service, are the ones who will rank well and likely succeed with the system.

“Oh, of course, there are caveats on the operation [of The Rug Club]; it’s all new,” says Cibor who then also acknowledges maintaining the accuracy of the inventory data is to be their biggest challenge. “Our first goal is to get the system up and running before we then delve deeper into what it can do.”

The Rug Club stands on a precipice, yet is well informed enough to know it is best not to jump into new endeavors without a plan. By acknowledging the restricting and paralyzing nature excess inventory can have on business, The Rug Club challenges the assumptions that the rug industry is dependant upon high inventory levels for success, while simultaneously seeking to leverage those same excess inventory levels into a transmogrifying force moving the industry toward a future unburdened by the past.