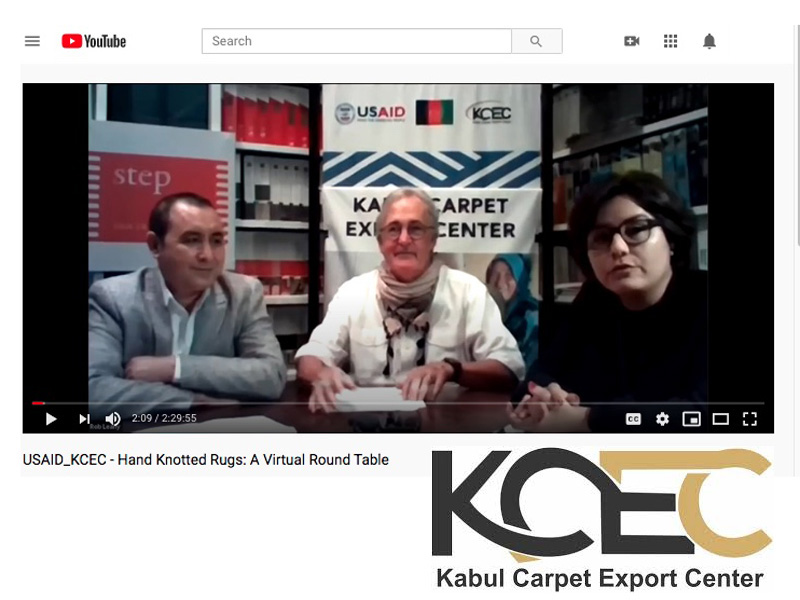 The Kabul Carpet Export Center (KCEC) organized a Global Carpet Industry Virtual Round Table on August 25, 2020 that brought together the leaders of the world’s hand-knotted rug trade to discuss the current state of the carpet market in the time of COVID-19.

Those who were unable to participate, can now view the entire Roundtable via:
https://www.youtube.com/channel/UCdBIzOK9b9Sx4oddxJgmHLg

The Roundtable was conducted over Zoom, presenting speakers from eight countries, and drawing viewers from across 13 time zones, nearly all of whom remained with the gathering for its entire two hours and thirty-five minutes.

The idea of the Global Virtual Round Table was developed by KCEC’s managing director Rob Leahy when it became clear that several key carpet industry trade shows would not be happening this year. While the main purpose of those shows is to sell carpets, an equally important element is the chat, the news gathering and the casual meetings among the movers and shakers in the carpet industry. As the first international carpet industry gathering of any kind since the COVID-19 pandemic struck, the Roundtable sought to fill that vacuum.

Najlla Habibyar, the KCEC’s Chief of Party in Kabul, kicked off the Roundtable noting that it was an extension of KCEC’s goal is to create more jobs for Afghans, especially for Afghan women. She said that while KCEC aims “to support the manufacturers, at the same time we support the buyers.” KCEC, she said, “will be your eyes and ears in Afghanistan to help you meet whatever your requirements are. We have a quality control team making sure that things come out as ordered and on time.”

The KCEC Roundtable focused on production, sales and trends in design. Each segment was led by an expert from the rug industry media with special knowledge of that topic.

Michael Christie, the editor of Rug Insider Magazine and a long-established voice in the industry for his blog The Ruggist, chaired an insightful session on production, that focused on the three major producing countries: India, Nepal and Afghanistan.

He was joined by Gaurav Sharma, the managing director of Obeetee who spoke from his base in Mirzapur, India and discussed the current production there; by Ryan Higgins, the owner of Tamarian, who addressed the situation in Nepal where most of his carpets are made; and by Alex Zahir, the production directors of KCEC who gave an update on Afghanistan.

Tim Steinert, editor-in-chief of the German bi-lingual quarterly carpet! magazine, hosted a wide-ranging panel on sales, introducing wholesalers and retailers in Europe and North America who reported that carpet sales have been surprisingly strong, despite – and possibly because of – the pandemic.

Speaking to that issue were Fritz Languaer the owner of ORITOP participating from Vienna, Austria; Stefan Amstad, the Category Manager for the Swiss furniture chainMöbel Pfister AG; Jack Simantob, co-owner of Art Resources in Los Angeles and the moving force behind the Rug Show New York; and Sam Presnell, owner of The Rug Gallery, a large retail outlet, in Cincinnati.

Lucy Upward, the editor of COVER magazine led a discussion on identifying design trends in an uncertain world. She herself identified several major design forces that she sees as likely to impact carpets before introducing George Haroonian, owner of The Rug Warehouse in Los Angeles, and Lisa Slappey, co-owner of two stores in Houston, Pride of Persia and Postmordern Traditions. Both described design trends each is seeing in their respective markets.

Graham Head, recently retired after 17 years as president of the trend-setting ABC Carpets & Home in New York, reflected on the major changes that have swept that carpet industry over his forty years in it, and stated, “All the rule books have been thrown out.”

Reto Aschwanden, the managing director of Label STEP, described by one participant as the “conscience” of the industry, urged buyers “to place as many orders as possible, and as soon as possible. Providing jobs is the single most helpful things for weavers.”

Leslie Stroh, publisher, and Sarah Stroh Thornton, editor, of Rug News and Design, strongly voiced the belief that on-line marketing will supplant trade shows as vehicles for introducing new-to-market goods, and that telling the stories of the people who make the rugs is critical to on-line sales.

Key points made several times by various speakers during the Virtual Roundtable included:

The Virtual Roundtable was conducted from the offices of Fine Rugs of Charleston, where KCEC’s Rob Leahy, Alex Zahir, Najlla Habibyar and Stephen Landrigan were directly involved. KCEC’s Richard Ringrose participated from his home in England owing to travel restrictions imposed by COVID-19. Technical direction was provided by Andrew McDonald of Destination South Meetings and Events based in Atlanta.