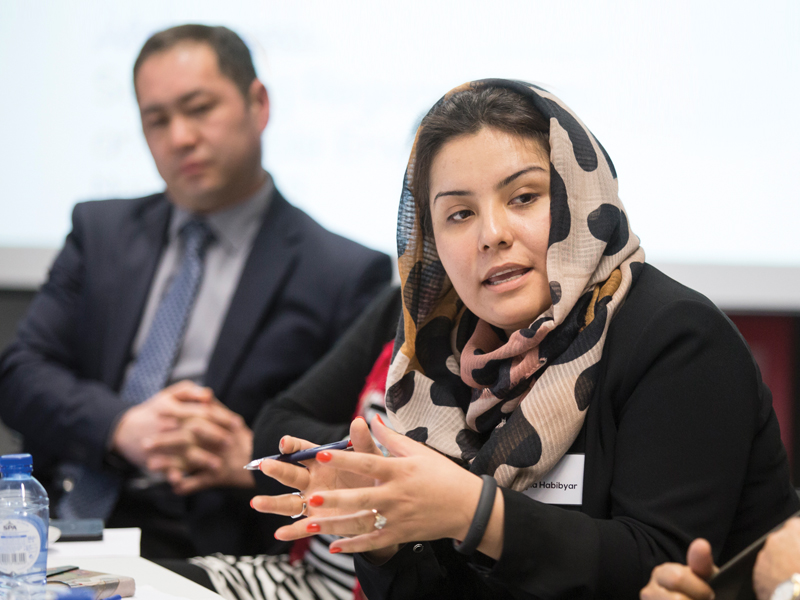 Whether it’s for the war rugs woven during the era of the Soviet invasion, or for weaving in exile in Pakistan during turbulent years under the Taliban, the weavers of Afghanistan are renown for two things: the quality of their craft and the inimitable qualities of the region’s Ghazni wool. Equally as unique is the will of its people, particularly its women—standard bearers of the Afghan carpet—as the country enters into a 21st century global economy.

The country of Afghanistan, officially the Islamic Republic of Afghanistan, enjoys a long tradition of rug weaving. Unfortunately, decades of conflict have repeatedly disrupted the lives of its citizens and by extension, its rug workers and weavers. Throughout it all however, the rugs and carpets of Afghanistan have been revered in the marketplace. This is no small feat given the obstacles faced by the country’s rug makers in bringing their wares to market. The Kabul Carpet Export Center (KCEC) is an enterprise established with assistance from the United States Agency for International Development, or USAID, to help facilitate logistics, networking, and a host of other activities critical to the success of any import/export business.

Rob Leahy is the Project Director of KCEC. I spoke with him and Project Leader Najlla Habibyar KCEC’s Chief of Party, USAID parlance for the “leader of the project in the country,” during a Skype call to Kabul on June 13, 2019. Leahy and Habibyar both stressed the need to develop Afghanistan’s rug making sector in a manner which best serves the country and its people. Critical to this is the empowerment of women who, while being the primary weavers of rugs in the country, have rarely been able to move into more managerial or leadership roles higher in the supply chain. 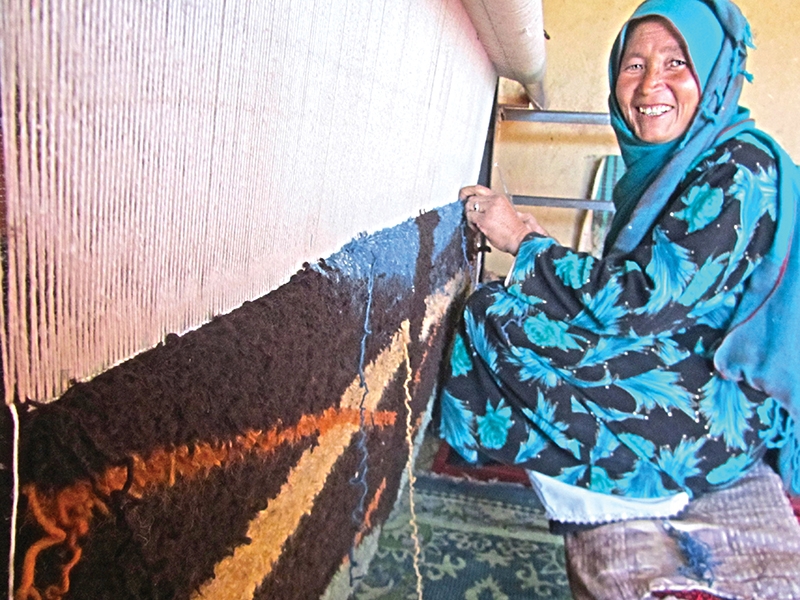 Afghan woman shown weaving. The work of KCEC aims to improve the lives of not only Afghan weavers, but also to promote and encourage women to work in all roles within the rug trade.

Much of this is cultural. Leahy states one purpose of KCEC is to “turn a cultural craft into a viable business” while at the same time seeking to transform the lives of the women working in Afghan carpetry. This includes Habibyar about whom Leahy had this to say, “I first met Najlla in 2010, I think, and was impressed immediately with her grasp of the potential that small and medium-sized enterprises have in helping the families of Afghanistan and in particular the women of the country.  She has a broader, more practical view of that potential than any Afghan man or woman that I have yet met.

So, when we were establishing the Kabul Carpet Export Center, Najlla was my first and only choice to be our Chief of Party. It is a lot of responsibility and Najlla is managing the project admirably.”

That is Leahy’s perspective as a veteran rug trader from South Carolina. I include it not to provide bona fides nor credibility for Habibyar, but to illustrate the degree of mutual respect necessary to move beyond certain rigid legacy, institutional, cultural, and corporate structures. It is then with the utmost of respect that Rug Insider presents the eloquent words of Najlla Habibyar as she explains her perspective on the current and hopefully future Afghan carpet industry.

“I was among those million Afghan children who lost their childhood to the fear of growing up in homelessness and the need to survive. My ambition for life was shaped when I started my first job, immediately after the fall of Taliban, at the age of eighteen years old as computer operator in a local NGO in Afghanistan. Feeling so foreign and strange in my own land, where women were treated worse than animals; the terrifying and horrified looks of men petrifying and judging, even in the post-Taliban regime. Even with all the efforts by government and international communities to promote women’s rights, still the country was struggling to acknowledge women’s contributions in any walk of life.

I knew that I, as well as my country, had a long way to go. I constantly tried to find solidarity with Afghanistan, despite the peoples’ perception towards me as a woman. I was lucky to belong to a family where education has been a must for both my brothers and me; I remember while being a refugee with almost no income my parents did their utmost for my brother and me to complete our primary and secondary school. Given our only income was my father’s teaching income, the cost of our education placed a serious toll on the family livelihood with impacts felt until now.

I was not alone. Many other women had to go through the same situation, feeling the same disappointment of not being accepted in a male-dominated country. We had to and still have to work harder than any of our men folks to prove ourselves as competent.

I have served multiple USAID projects that were involved in private sector development and have also worked with the Afghan government as Chief Executive Officer of the Export Promotion Agency of Afghanistan. Moreover, as manager and implementer of donor-funded activities in Afghanistan, I’ve witnessed the double standard where men are judged on their potential, while women are judged strictly on what they already have accomplished. This not only holds back women from moving into leadership positions but also undermines their capacity and room for growth. As CEO for Export Promotion Agency of Afghanistan, I realized how women are undermined and paid low wages in the [rug] sector; one that survives because they have invested their lives in it.

I strongly believe the way to prosperity and economical sustainability for Afghanistan is to create an understanding that women are capable of leading businesses and organizations. My observations for improving the lives of Afghan women in the [rug] sector—already known the world over—actually landed me at the Kabul Carpet Export Center. I envision the role of my team as supportive of those women by providing them with access to jobs and also to help them benefit directly from their work. Women used to weave flowers, birds, and decorative knots [into rugs] to utter their dreams, and those carpets were a niche in Western markets.

“Understanding the current market dynamics in the Asian region and how speedily the carpet industry is shifting from hand-made to machine-made are signs that Afghanistan could invest in this industry to have immediate success and sustain the culture of generations.“

But these same women lack confidence as well as courage to become business owners in a country like Afghanistan and thus have remained as weavers.

Recently, when KCEC provided capacity building training to carpet manufacturers, Ms. Ayana Gul, one of the carpet manufacturers and carpet business owners, mentioned that KCEC is a door of hope for women like her who have faced constant challenges—from starting their business to being able to sustain them. Lack of information about exhibitions and the inclusion of women are cultural challenges that KCEC wants to surpass in order to create an environment for both men and women involved in the sector.

As Chief of Party for KCEC, I strongly believe that we are sowing the seeds for long term development of women working throughout the sector.

Small businesses are the most powerful tool for any country to achieve economic sustainability in a short period of time. Understanding the  current market dynamics in the Asian region and how speedily the carpet industry is shifting from hand-made to machine-made are signs that Afghanistan could invest in this industry to have immediate success and sustain the culture of generations.

Thus, my vision for this sector is to see the Afghan hand-knotted carpet gain its own identity, distinct from the past when they have been exported and sold under the name of a neighboring country. We only can change this by preparing Afghanistan and supporting the carpet manufacturers to have the carpets finished within Afghanistan. KCEC’s role is important for creating the opportunities and an environment that is friendly and to build the support chain enabling manufacturers to access international markets.”