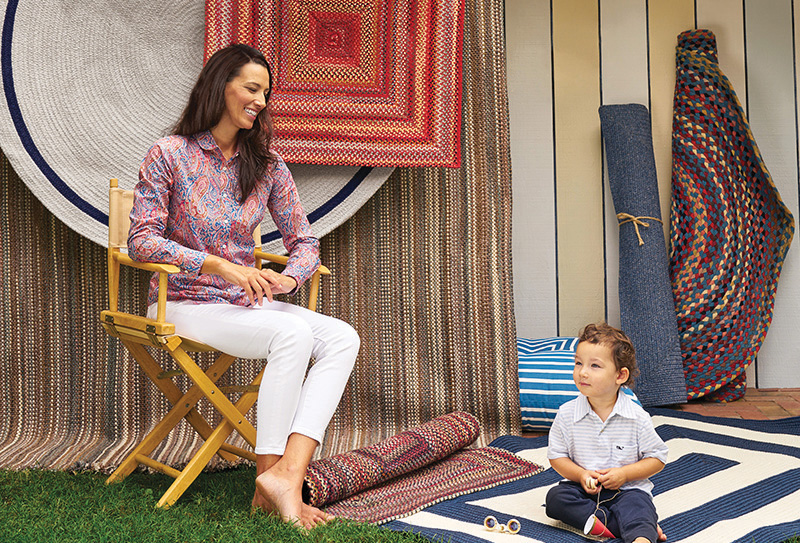 A Look at an Iconic American Style: Distinctively American in its aesthetic, the classic braided rug endures at the hands of Capel Rugs.

In French the phrase ’s’il vous plaît’ translates literally as ‘if it pleases you;’ you are undoubtably quite familiar with its abbreviated English use on invitations—it is the S.V.P. in R.S.V.P. As a pun, plait as a noun is also a braid, or as a verb to braid, and from the perspective of ‘Made in the Americas’ nothing could be more pleasing to those with an eye for the traditional vernacular than a classic braided rug.

Capel Rugs still produces this quintessential American form, albeit with the aide of relatively modern technology and an eye toward contemporary aesthetics. Rug Insider spoke with Cameron Capel about the firm’s continued success with the classic.

“Braids are around fifty percent of our business … they are a large seller for us. The traditional braids still sell, and we attract a younger audience by using interesting new constructions and updated colorations,” states Capel when asked to describe the importance of braided rugs to the family-run firm which has been in business for over a century. Whether concentric or cross-sewn rectangles, octagon, round, or even baskets, the offerings today differ greatly from the well known oval shape which is the progenitor of the style.

“Made in America is a strong statement, that carries a lot of weight and pride.“

The braided rug was a staple in early, Colonial American culture and remains the rug and carpet world embodiment of “Americana,” though in fairness Atlantic style hooked rugs deserve fair mention as also defining of Americana. Pioneers and settlers utilizing the sparse resources available to them, used scraps of clothing and other excess materials to make floor coverings that would provide warmth and protection for a home's residents and guests.

The fashioning of a braided rug was both functional and life-saving - staving off cold winter drafts - as well as decorative by introducing bold, often abstractly colorful adornment to the floor. By consuming used textiles, these craftspeople up-cycled their wares long before the term entered use in 1994. As if to bookend the strong ties modern braided rugs have to their origin, Capel concludes, “Made in America is a strong statement, that carries a lot of weight and pride.”

The process of creating a braided rug is relatively simple, especially in comparison to the more haughty hand-knotted rugs and carpets which tend to dominate discussion of the genre. They can be constructed in myriad ways including banded braid construction, cloth braid construction, flat braid construction, and yarn braid construction. Though in the final analysis the technical structure—closely akin to a French ­hair-braid—is all but identical with the materials and their forms being the key distinguishing factors. 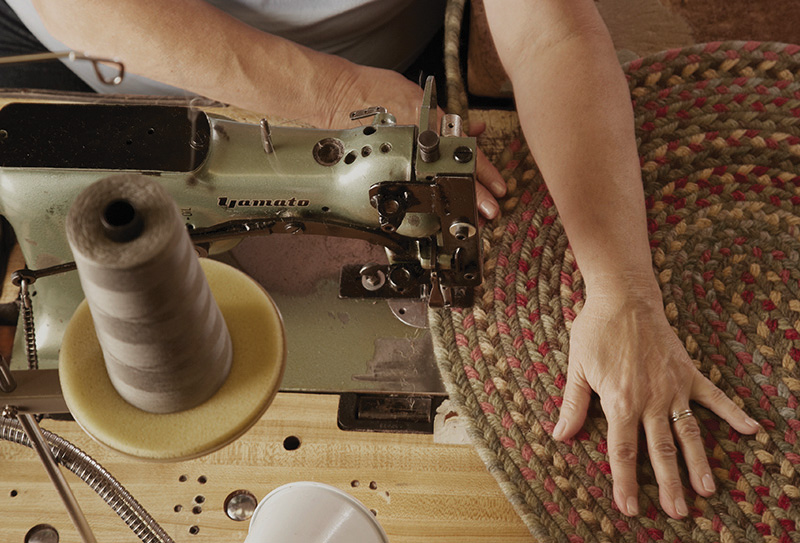 Much has been automated and mechanized in the production of braided rugs, but as with most textile work, the sewing still requires at least some of the finesse of the human hand.

The cloth braid construction is indicative of the aforementioned time when disused clothing was cut or torn into strips and then hand-braided into a floor covering whereas the flat braid construction is one of the easier and more classic methods featuring three ropes of fabric or yarn which are intertwined. It is this latter which best describes the braided rugs made today by Capel.

“Many Unites States’ consumers are very knowledgeable about ‘Made in the USA,’ and want to support local artisans and companies. They love the 102 year old, family owned and operated story,” says Capel who also cautions the moniker is not without its downsides. “Yes, [the made in the USA label helps sell rugs], however there is a price differential that some consumers cannot hurdle. Frankly, goods made in the United States have higher costs, for a multitude of reasons.” These include labor wages, insurance, and healthcare to name but a few and these concerns mirror those now just beginning to emerge in the Global South, which is to say the developing world. 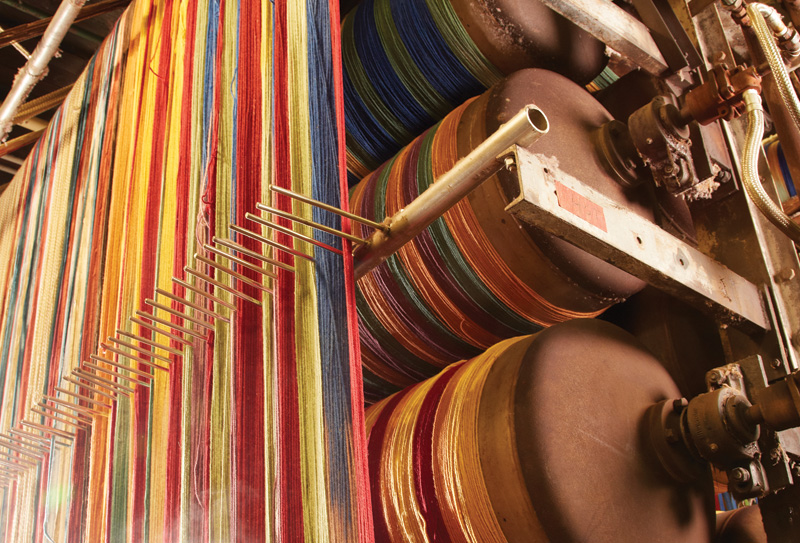 Above, multi-hued yarns await transformation into a braided rug at Capel Rugs.

Braided rugs would have likely long ago faded from the American decorative realm had it not been for technological innovations such as machinery which mechanically producers the raw braids in long continuous ropes before a technician, a sewer and one could argue artisan in actuality, sews the raw braids—with the aid of a sewing machine—into the many shapes now offered by Capel.

It is this balance between automation and handwork that has kept the technique alive and still “Made in America.” 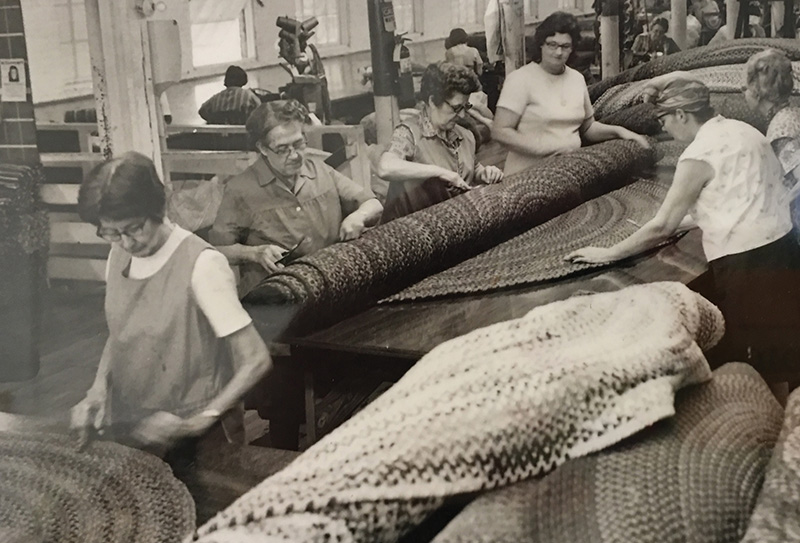 Returning if only briefly to the colonial roots of these rugs, several of the same features which endeared the form to settlers still offer tangible real world benefits to consumers of today. Most notable is, as Capel Rugs describes it, the “secret weapon” of the style—they are reversible. After many years of use and once one side has seen better days, a braided rug can be flipped it over and a whole new rug “appears” for many more years of enjoyment. A second, although no less important feature is that owing to the generally variegated patchwork patterns associated with braided rugs, they hide soil, lint, and crumbs exceptionally well. This however should not be used as an excuse not to care for the rug properly.

Capel Rugs again, “By owning these rugs, you actually own a piece of our great country’s heritage,” referring of course to the United States. It is a strong heritage born of utility, fashioned as it has been over time to retain the versatility of the technique while simultaneously being modernized over recent decades to display its lasting appeal and charm. To that we say“it pleases us” and hopefully it will please you as well.