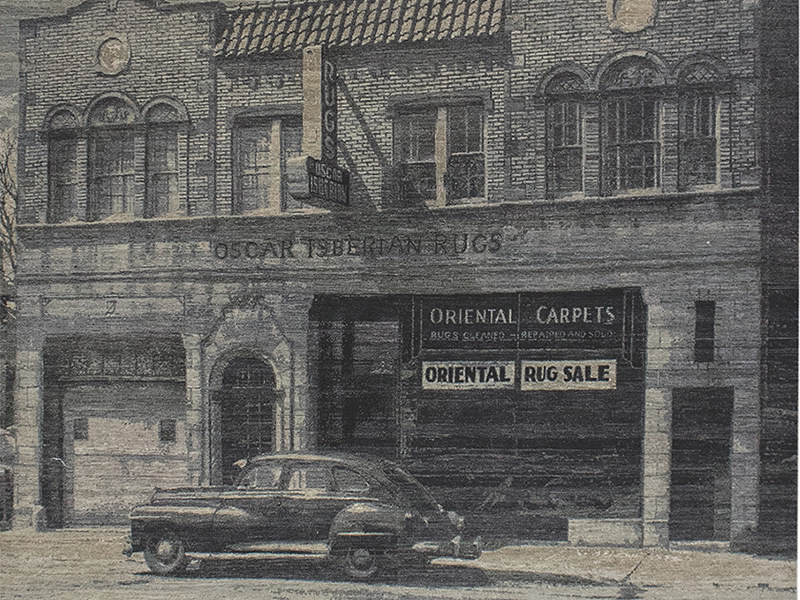 According to company lore it all began in 1920 with eight rugs and a wheeled cart. That’s when Oscar Isberian, a young man from Wilmette, Illinois, co-founded Oscar Isberian Rugs with his brother Megerditch. Today the firm has grown from those humble beginnings into Chicagoland’s premier rug and carpet retailer, Oscar Isberian Rugs. As the firm nears its centenary, RUG INSIDER talks with the current principals of the firm, brothers Oscar Tatosian and Sarkis Tatosian (and others) about the secrets to their company’s enduring success.

It is all but impossible to be dealing in rugs and carpets in North America and not know the name Isberian. As an enduring and well reputed company servicing the United States’ third largest metropolitan area the firm’s clout and buying power is apparent; it was obvious to me the first time I met Sarkis Tatosian during the annual Jan Kath Family Affair, just as it was when later on the same rug trip through Germany I had the pleasure of meeting his younger brother Oscar Tatosian during a soiree with Rug Star by Jürgen Dahlmanns. In both instances the brothers approached rugs with a degree of reserve commensurate with their experience, yet at the same time expressed a willingness to “Say ‘Yes!’ to everything,” as Sarkis would later tell me as we discussed their success for this article. More elusive though is an understanding of precisely what has lead to this success.

Given the storied traditions of the rug industry, it is appropriate that when pointedly asked about what has allowed Oscar Isberian Rugs to endure the brothers are quick to begin retelling the history of its founding. One whose prescient details foretell many of the secrets to their success. Started by the Tatosians’ maternal grandfather in 1920, the firm grew slowly and judiciously before expanding with the commissioning in 1928 of the firm’s original building, still occupied by the venerable rug house, in Evanston, Illinois. Now commemorated by a photorealistic carpet which begins this article, the facility was “modern for the time” as described by Oscar Tatosian who further mentions his grandfather built the structure with a $100,000 mortgage going into the Great Depression. Through a combination of prudence and hard work, Oscar Isberian Rugs survived the depression by offering not only sales but cleaning and restoration services as well. As the post-war era brought with it a rise in popularity in broadloom, the company eagerly embraced the trend, adapting to the needs and wants of the era. ‘Change or die.’ emphatically states Oscar. 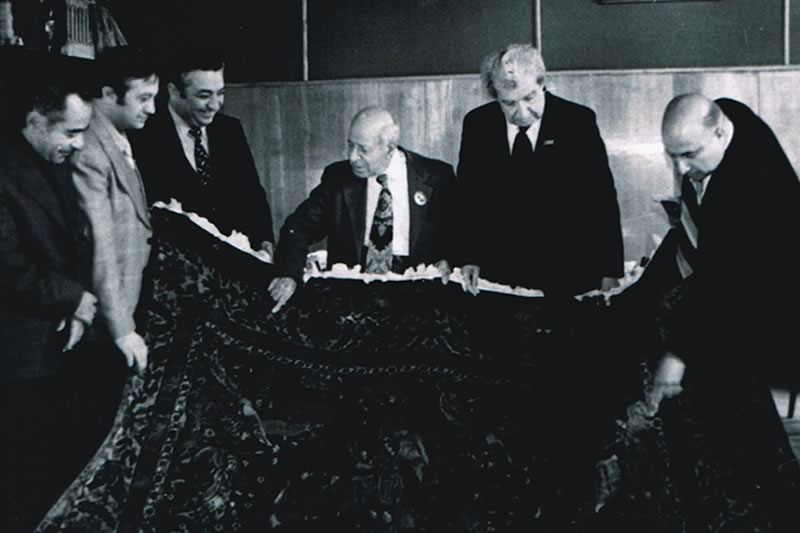 In this archival photograph, Mr. Oscar Isberian is shown donating a rug to Armenian causes.

Such as it was until the early 1980s when the tight-knit family was faced with a decision. The now elder Isberian had largely retired from daily operation of the company, leaving it in the hands of a highly capable and trusted manager. His then imminent departure, however, prompted a conversation between grandfather and grandsons regarding the future of the eponymous firm. “We had always been involved in the business because of the closeness of our family. We, my brother and I, were both studying at university and we had to decide what to do. Do we take over the business from our grandfather?” recalls Sarkis before continuing, “We had a great relationship with our grandfather… .”

In the end the brothers opted to take over the family business, skipping a generation as their elders had long embraced other careers. By alternating work and studies the brothers were able to keep the business running while earning their degrees. “I would go to school one semester while Oscar ran the store, then he would study one semester while I ran it,” says Sarkis. As the brothers completed their studies and began running the firm full time, the consumer flooring market once again returned handmade rugs to what was en vogue, a trend the brothers welcomed and once again adapted to meet.

Ebbing to the trends of what is and is not currently popular with consumers is an oft-cited mantra for those who remain successful over time, so the Tatosians’ endorsement should hardly come as surprise. Their success is manifold however, not just succeeding with sales but succeeding in building lasting relationships. “Relationships of all kinds. It does not matter; it’s a partnership, simple and clear,” concur the brothers. 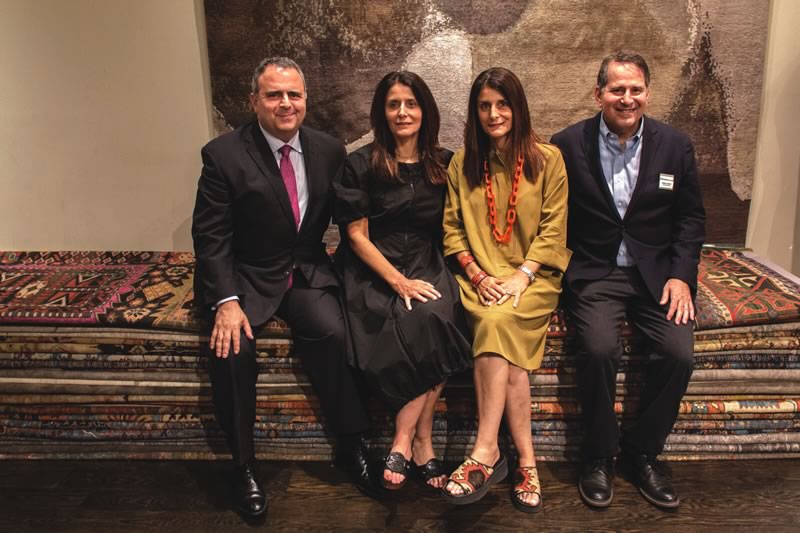 Relationships of all manner have always played a central role in the success of Oscar Isberian Rugs. This includes the support of a tight-knit family of siblings. Shown left to right are brothers and sisters, Oscar Tatosian, Emily Rabjohns, Lucine Nersesian, and Sarkis Tatosian.

When a customer enters one of the now three Oscar Isberian showrooms they are greeted with warm hospitality. “We like to say we are welcoming people into our home,” states Sarkis. “It’s the depth of the relationships as well,” interjects Brooks Ralston, Business Development Manager for Oscar Isberian, who has been listening in on the conference call. “When I came to Oscar Isberian [from Holly Hunt] I was surprised to learn so many of our customers are repeat customers.” Moreover it’s the positive and healthy relationships between staff—porters, salesmen, managers, and the like—the brothers, customers, and suppliers which harmoniously act to bring success to the business.

“We also offer good and fair pricing for our products,” adds Ralston before Sarkis continues, “We sell everything at a fair price.” This does not mean Oscar Isberian is a source for inexpensive product, rather that the brothers know and understand value, passing that value and the appreciation thereof on to consumers regardless of pricepoint. “If you gouge a consumer on price, it is a slow death. You must honor the intelligence of the customer,” knowingly adds Oscar who continues “If someone is willing to spend perhaps $10,000 [or more] for the floor, they deserve respect.”

The brothers are seasoned rug buyers who have long sourced rugs and carpets through multiple channels. “Since the mid-1980s we have been on the ground buying rugs directly in places like India, Pakistan, China, and Nepal, but we also buy from established brands and importers. We’re not afraid to try new things,” says Sarkis. Having observed both Sarkis and Oscar buying at various trade shows, I can personally attest to this statement, but add there is a degree of caution, that prudence inherited from their grandfather, which guides their decision making. Sarkis again, “Jürgen [Dahlmanns of Rug Star] has a great product. We were cautious at first, though now we are in pretty deep with his line.”

As if to impress the importance of relationships to the success of Oscar Isberian, the conference call is now joined by an unexpected guest who enjoys both a strong business relationship as well as a friendship with the Tatosians. “Michael, we have someone here who would like to say hi to you,” chimes Ralston. “Is it Jürgen?” I guess knowing due to social media he was then in Chicago. “Hello my Dear Michael!” begins Dahlmanns before launching into a monolog attesting to the merits of the Oscar Isberian approach. “You know, so many people ask what is the right business model? Is it customization? Is it stock? Many traders don’t want to buy stock anymore, but here, Oscar Isberian is still running a model full of stock. Why is it still successful for them? I believe there is a connection between the owners and the quality of stock, always questioning the mix of stock that is on hand.” Dahlmanns is also quick to praise the Tatosians’ purchasing savvy and character noting, “They make well-informed purchases. There is a heritage of ethics passed from generation to generation with no mistreatment of the customer.”

“There is a heritage of ethics passed from generation to generation with no mistreatment of the customer.“  — Jürgen Dahlmanns on Oscar Isberian

A humbleness now descends on the conversation as the Tatosians gently rebuff Dahlmanns’ statement, “We have nearly a hundred-year tradition of accumulating rugs, so it is easy for us to find a rug in our own stock for a customer. Whether it was embracing the renaissance of new rugs in the 1990s, introducing more custom capabilities, or once again introducing broadloom to our showrooms we are fortunate to have a critical mass of rugs, services, and customers to be successful.”

In truth, the Oscar Isberian “formula of success,” such that it is, is simple and honest. It begins, as it must, with the principles of the firm’s namesake Oscar Isberian, primarily those of prudence, hard work, and a sense of family. These values are expressed by Oscar and Sarkis Tatosian just as they are by the dedicated staff of the firm, many of whom have been with the company for decades. This extended family if you will, knows and understands the value of mutual respect extending it to all manner of relationship: business, consumer, personal, or otherwise. Beyond the overarching importance placed on strong relationships, the balance is tried and true business success one-oh-one: A good selection of quality product, sourced at fair and equitable prices, sold for fair and equitable profit. Good service as witnessed by the breadth of market appropriate products represented. And finally, all of this provided by a vested staff who not only respect the customer, but are respected by their peers and employer.

The “secret” if there is one, is being wise enough, perhaps fortunate enough, to bring it all together in a manner fitting the market zeitgeist, and then revisiting it in order to do it all over again when that mood shifts as it inevitably will.